Share All sharing options for: Running Real Fast Through München 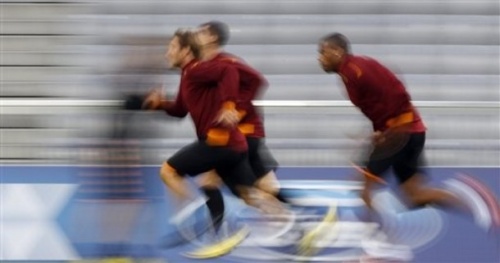 In an ideal world, Francesco Totti can really run that fast and a palpable simmering accompanies this game as the battle for the fourth Champions League spot between Germany and Italy continues.

Not quite the ideal world right now, so it's back to basics. Sounds a bit like Ranieri's mantra after the second league game last year, eh?

* - I've long thought it's Josue, Wolfsburg's captain, who's the love seed of a Brazilian scouting trip gone wonderfully passionate for Prade. I have no basis for this, like most of what's said here.

Do all those and they might just build a nice, strong foundation for the season while running away with the kitty.

Remember: three points are excellent, but one point is better than none. A good showing - that's all we ask.

Liveblog up tomorrow early, in which I'll ramble on about the luck of Roma's weak fullbacks lucking out of the RibRob & RobRib duo while also bitching sporadically about Germany's UEFA coefficient being almost wholly derived from the second-tier UEFA Cup/Europa League. They don't give out Olympic Bronzes for lapping the Special Olympics field, do they?

No, they don't, which I have on good authority from Rodrigo Taddei.