In Pursuit Of Peace, Love & Triangles.

Share All sharing options for: In Pursuit Of Peace, Love & Triangles. 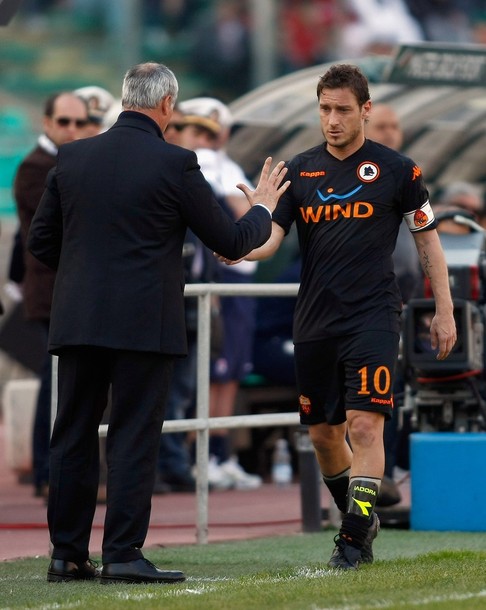 Right to the Trigoria news, which gives an appropriate idea as to the beginning of the season:

Burdisso's suspended but Mexes is, at the very least, ambulatory and spent the whole day Friday with the team. That's something, since That Guy Who Looks Vaguely Like Someone Else On The Team makes me think he's still got those Lazio leanings - or he at least plays like someone who belongs on Lazio. (Not over it yet, no.) Castellini's out and Riise is still answering to Fred, so the surprisingly good Cassetti on the left-Rosi duo will go ahead against Bologna. Something tells me that after largely containing Bayern's wings and fullbacks until sucking wind, Bologna will eat them for lunch and the center will now hold strong. Yes, the two are likely related and yes, that's just how it works with Roma. Which means David Pizarro is going to play the game of his life and Daniele De Rossi will score twelve while looking fresh as a motherfluffin' daisy.

Mirko's a possibility but not fully fit and Borriello will be fine, even though he's played 8,600 mins on legs which supposedly weren't fit. A lot of the little things conspiring.

But that shouldn't matter. Last year Ranieri made something of a habit of getting the result regardless of circumstances, even though he rarely, if ever, had to deal with even a mini-crisis of circumstances - in October, during the lean times, I think I recall something vaguely similar. Perhaps he needs to work the injuries and fatigue out early? I'm okay with this then.

This would be a good, if not necessary, time to recreate the past. Nothing but triangles for the next week.

This annoys me greatly. Less the situation of Totti being displeased with the tactics and more the fact that it's blown up to the point of Francesco having to issue a statement - in which he stated it's all butterflies and cupcakes - and the fact the I have to be somewhat concerned with it. (Topically, yes; truly, no.)

But contrary to popular opinion, I've done the blasphemous thing and decided against Totti here, for a number of reasons, even if Totti kind of went against Totti, effectively blaming it on that ever-pesky 'heat of the moment'. And being Roman. Which, let's be frank, is about as good an excuse as you're going to get. It's a wonder someone doesn't leave training in tears once a week. (Cicinho seems the most likely candidate.)

i. The comment was fairly innocuous and born out of frustration. Happens all the time with every team in every league in every sport, and will continue to happen so long as sports exist.

The media, man. The media.

ii. They played fluid, solid football against Inter in the Supercoppa; no shackles. The arsenal was emptied against Cesena and they got nothin' (albeit up against an extraordinary one man show in net). They pushed the throttle against Cagliari immediately after going down to ten and ended up the wrong side of a slasher flick. The same would've happened against Bayern's supremely dynamic counter and pacy attack if they'd tried to run or push the tempo with an ill-suited lineup on tired legs for 90 minutes. Sure, possession would've helped, and I'm curious as to why Simplicio isn't being given a chance, yet another reason this doesn't really swing me into Ranieri's corner, but the pieces weren't there. Are Matteo Brighi and Simone Perrotta supposed to seamlessly replace Mirko, Jeremy, Adriano and Okaka in strategy?

Playing defensive one in four - in Munich, at the Allianz, once again - does not an identity make. Claudio made the right call with the pieces he had at hand against the opposition he was presented. Totti's football mind is beyond reproach and I know he sees these things, so the frustration with how things have begun is certainly understandable.

iii. I don't prescribe to the theory that football should be played beautifully first and for victory second. That's inanely absurd. You play to win, regardless of the sport, whatever the means, inside the rules (you'll see how Inter were just wiped from the equation). Period. Spalletti football is a bonus - a bonus with its inherent weaknesses* - that you don't take for granted and snap back to reality when it's over. Not everyone can be Barcelona and not everyone should try to be, either.

* - I watched the first leg of Zenit v Auxerre, a game in which Zenit were miles superior in talent and their play was aesthetically marvelous; so fluid, so artistic, so Spalletti. And they played marvelously while scuffing chance after chance after chance. Sound familiar?

iv. Considering another coach is just...I don't know. I genuinely don't see, looking plainly at the circumstances in front of Roma and the transition of emotions from September to May of last year, how anyone could decide Ranieri can't get out of this little hole - and that's all it is, really: a tiny little hole - or, at the very least, doesn't deserve the chance. Some of the stuff coming off the presses is just mystifying.

None of this is to say Ranieri is infallible. Leaving two subs unused in a tired side is still utterly baffling; perhaps the polar end to taking off Totti & DDR in the derby.

Which is a good reminder: for every stroke of genius, feat of seemingly Herculean testicular strength, there will be a moment of maddening frustration. He's Mirko, but on the touchline.

And given how we've seen Mirko carry this team, with the clear evidence Claudio has carried them too, I can certainly live with that. Perfection is not required so long as he stays true to himself and his methods. The end by any means.

With Menez behind the attack, or even on the right, Ranieri could instruct the remaining 7 to sit back a la Bayern and the team would go from whispers of catenaccio to good, uncompromising, progressive, proactive football.