One Plus One Equals Negative Two

Share All sharing options for: One Plus One Equals Negative Two 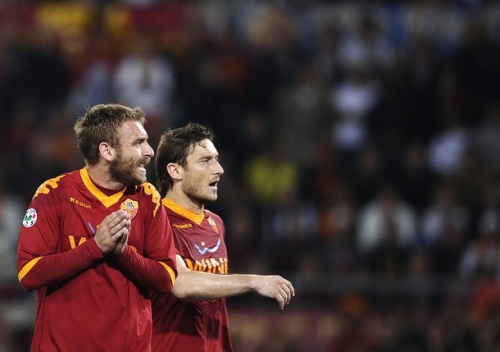 Two rather large, Roman-sized names have disappeared from the team sheet; one expected, one less so. If they're looking for artificial motivation, winning it for the Romans would be a small step. Unfortunately I think this means Rosi will start making runs twenty meters beyond the Brescia net out of plain ol' overexuberance.

Mirko will reportedly be back, which is lovely and all, but at the expense of Francesco. However, it'll be nice to see how Jeremy and Mirko, two players normally more mobile than Francesco, play off of a proper prima punta in Borriello. At the very least, they cause a ruckus when healthy. Are they healthy? Who the hell knows - Jeremy hasn't played 90 yet, Mirko's been hurt since the break and Marco 'Doesn't Have 90 Minutes In His Legs' Borriello is still putting in those 90 minutes every hour of every day. Somehow.

The rest is more of the usual mixed bag. The return of Cassetti is something of a metaphor for the season: thrilled he's back, but this means being thrilled they'll be running out a third choice left back at less than 100%. Under most circumstances, that's a mini-crisis and a quick refill on the psychotropics; under these, it's as good as it's gonna get at the moment.

So another day, another chance to right the ship by any means necessary with whatever resources are at hand, whether fit or not. Playing as they did the first hour or so against Bologna will go a long way so long as they can stretch it to 90 minutes.

And that's all that can be asked, all that should be required: a little bit of technique and a lot of heart for 90 minutes. In the name of the Romans, in the name of Roma.

Interestingly, I wrote something about the 4-2-3-1 twice in the wake of the Bologna collapse and deleted both times, because I couldn't convince myself this is largely tactical or derived from formation; I like the 4-3-1-2 and it seems the right call with a Bo-To-Me attack and Mirko on the bench.

But the gist was this:

Last year when things weren't quite clicking through October, Claudio stated they needed to "go back to what they know". And considering the core of this team has been around for some time with zero tactical fluctuation throughout most of the Spalletti years, it'd be safe to assume that 4-2-3-1 is still "what they know". A little arithmetic can't hurt: 1+1 = -2.

There aren't a great deal of issues to be had with the tactical choices or formations from Bologna - they defended like ninnies toward the end. But when nothing seems to be going your way, sometimes it's not about trying to find and change what's wrong, but trying to change anything, even if it's something of an overhaul. Football's about finding the good in the sum, not the good in individual pieces.

They know the 4-2-3-1. It's worked a number of times and teams are scheming nights on end knowing fully what's about to be thrown at them, particularly Brescia. It's in the quiver, ready and able should it be called upon in their time of need.

If Claudio feels this current situation is an emergency, then go right ahead and find their comfy zone: break the glass.