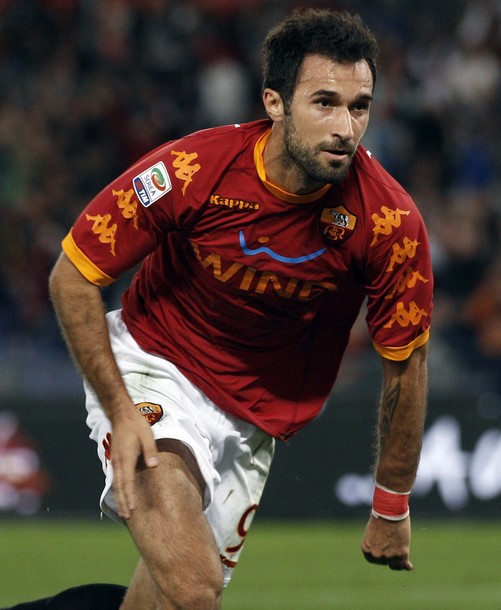 At some point in the year two thousand and nine, roughly near the time of November, Mirko Vucinic flipped a switch. It may well have been his switch, a fussy on/off - no dimmer - which occasionally shorts but just as often surges through the light, sending glass crackling to the floor below in brilliant supernova. His switch turned out to be Roma's switch.

Last year Mirko quietly, so quietly we hardly heard a peep, carried this team through a lengthy win streak and scudetto run. I am the last person on earth to heap the credit onto the goalscorers who nail one in five and reap the adoration when a defensive partnership hitting one in five is soon known as relegation; football builds from the back and credit should do likewise. Last year was, to a degree, the exception: Mirko gets a significant portion of that credit.

The annual crisis hit rock bottom - it hit the Earth's mantle to be more precise - 'round about the time they were donating a 1-0 piece of charity to Livorno at home. It was arguably the worst lost since The Day That Never Happened In Manchester - some might say it was worse when comparing opposition. And then Mirko Vucinic scored a goal. Entirely mundane save for the fact that it was his very first of the season. And then he scored another the next week, against Inter, out of relatively nowhere. And then he just kept scoring goals. And quietly, as Francesco aged, Jeremy attempted to do the very same, Mirko took over. Not just the goal scoring duties, but the team. Both scoring and creating once Luca Toni came to town and he was able to play his more organic, very quietly he put AS Roma on his back. Julio Sergio managed his fair share of the load as well, and David, Juan and Nicolas deserve many, many cookies, but he was the tipping point. From constant frustration and a second lost season to the most improbable run at a scudetto we'll see for years, beginning the day Mirko scored his first goal.

I don't need to sit here and point out the parallels, even those beyond Mirko; all I'd really like is to look back on both in a few months time: Mirko, with Inter somewhere in the vicinity.

It's something that can't really be explained, largely because he himself is beyond explanation. How can one man go from so rubbish to so astonishing the next? How does one have such a knack for that certain je ne sais quoi the sports world bills as 'clutch'? And what sane person pantses himself in order to celebrate a goal?

There is an indefinable quality within Mirko that we'll never find on video game ratings or a scouting report, the only hints of which would be a frustrated search for description and the splinters from a broken pencil. There is nothing to pinpoint because it is neither tangible nor intangible; it just is, existing somewhere in the gray space in between.

He wasn't Man of the Match - to call Juan flawless would be a grave injustice, as though he merely performed his job exquisitely; no, he performed that of several men exquisitely - nor was he probably near the top five. But that doesn't matter, because Mirko Vucinic doesn't do the leg work. He's the man who casually shows for the journey's final turn, when legs are weak and spirits weary, to put the team on his back and shoulder the weight of AS Roma across the finishing line in one singularly brilliant burst. Something like a supernova.

There is, however, one problem with this win: in order to understand its true value, we have to wait. Perhaps until Cluj, Perhaps until Napoli, perhaps until Christmas - we just can't know.

Fortunately there is one thing for which we no longer have to wait: