Share All sharing options for: Avenging That Dark Night 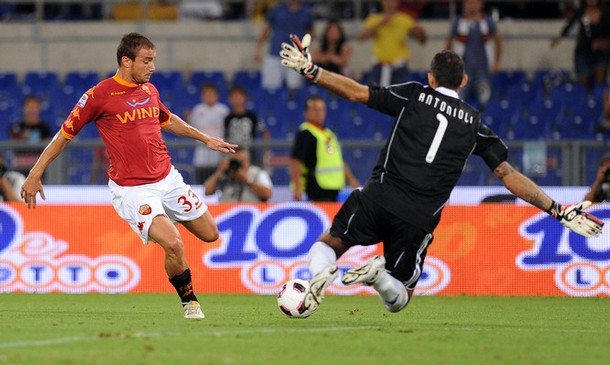 Looking back on it now, the opening night against Cesena set the tone for the season ahead: not quite the end of the world yet not quite the desired outcome, the first in a long conga line of occasions which simply make no sense whatsoever on a game-to-game basis. This seems even more apropos on a week when the ghost of Matteo Ferrari v Cagliari (hold grudges, I do) made an unwelcome return in the form of one normally supersmooth Juan Silveira dos Santos.

So righting the ship will be paramount, again, but with the idea of doing so in order to set a more positive tone for the second half of the season. Avenging the previous mindfuckery that was the domination against Cesena without the result to accessorise first, their pitiful away form second, and in the process beginning their run of 19 straight to close out the season in vintage AS Roma 'what the fuck just happened?' fashion.

Well, one can hope.

And now, of course, we must look to the marquee battle; that which will occur between the sticks, inside the six yard box and, if the Roman protagonist gets his way, somewhere near the center circle with pants down. With Julio Sergio out, it becomes Batman versus You Must Be Joking.

Another dark night may loom.

Rosi confirmed as starting until he pulls a Taddei and pulls his Rodrigo in the pregame, which seems rather inevitable. And on that note, has anyone in the history of the sport injured himself in pregame warmups than Rodrigo Taddei? The man must make no distinction between the real thing and before-play. (Heed this, ladies.)

Now how very 'Ranieri' would it be for Marco Borriello to land on the bench after being hailed as the missing piece versus Cesena, the caped who would've turned one to three, and yet still win anyway? That's just the way this club operates: making no sense whatsoever.

Of course Batman can't possibly have another spate of miracles up his sleeve, can he?