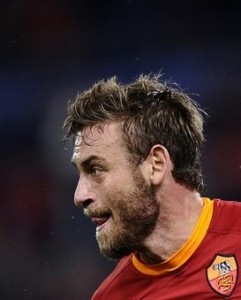 You know, not having Julio Baptista just hurt, ever so briefly, as they coughed up possession quite easily.

Corner Roma. I expect we could time this thing with a sundial in the shade.

89' More heart murmurs in the box, as JSB is forced out and the aerial team of Bu-Ju-Me is forced into duty. Menez into space. Ledesma yellow for what amounted to a wedgie.

Watching Jeremy slowly begin a run into space has easily entered into my five favorite things to watch in sport. That boy's majestic.

86' I imagine the attackers have a brief moment of confusion every time they see Nicolas Burdisso pushing high near the touchline. Seems something one would never get used to.

Daniele saves the day in the six as 42 red shirts in the box try and snuff out the attack.

Yellow on Simplicio. Got every bit of his money's worth on that one, too.

83' Juan needs a sports psychologist, if only to keep me sane. Actually, I wonder if I could see one myself about Juan's recent performances. Think that would fly?

82' Cute corner, but perhaps too cute, as Brighi chips it high. He's got about one, maybe two, moments of great technique per game. Quota surpassed.

Mirko with a stinging shot from deep(ish).

80' Bresciano on. Lazio leading the league in 'Guys I hate for no apparent reason' from non-Lazio teams, somehow.

78' Heart murmur moment: Floccari alone with a shot on net from 15, perhaps, but volleys it over.

Tremendous run by Menez, loses possession but it bounds to Simplicio, who breaks the line and slots it. Pure heart, pure engine.

75' Juan's turning into Loria every time he touches the ball as the last man back - duck and cover.

73' Burdisso uses his left to send a cross into the box. Several things wrong there as well.

Simplicio tying his shoe as part of the tactical buildup, surely.

71' Borriello shoots on his right; not quite Riise-esque, but we're getting there.

Brighi looks like he might've been a pirate in a previous life.

69' The back is a touch less assured right now, while the pace has slowed.

66' Fingernails are dust, while Burdisso saves the day from central defense, which he is not, as you know, playing, then clears it to rightback, where he was supposed to be. That was quite the heart murmur sequence.

65' This game has a steady flow, but it's not quite high-flying, write-you-mother type of stuff.

Mirko and Menez are evoking memories of the telepathic duo who used to run the streets of Rome.

60' And they're back down the other end. This isn't a game for the weak of heart.

It may be time to send Juan on a head-clearing retreat of some sort.

55' Juan spoils the party with a poor pass, then clears.

54' Well, this is a nice turn of events. Of course not unexpected, as they''ve grabbed this game by the throat in the second half.

Clear penalty on Lichtsteiner for his second handball penalty this year. Borri....

So, so dynamic all of a sudden. Mirko and Menez together is something of an ideal scenario with the game tied.

49' It's getting really annoying that Zarate is sending in excellent corners every time.

47' Brocchi elbowed Mexes. Possibly twice. Chippy, chippy, chippy - Yeremy has this type of effect on the derby, doesn't he?

46' Boy, what a change. And they're fresh. I like this. A lot....lofted free kick, Daniele wins another free kick...uhh, no foul. Wow, what a terrible, terrible noncall.

Menez wins a fee kick in the first ten seconds. Radu should be off, easily.

Mirko (Adriano) and Menez (Greco) on. Here come the cannons.

This is the same Roma from last year which needs to be judged on the whole, not the half. Solid in the back, need adjustments going forward, and they have them in the form of Menez and Vucinic.

47' Juan saves the day as JSB is caught out for a moment on a missed punch.

Adriano is surrounded by 4 blue shirt. The possession stats read 56/44 in favor of Roma - seriously - but they may need to make some changes to the midfield/attack at the half.

44' Greco slaloms; is no Mirko Tomba.

Ledesma is riding Romans like a one man redux of Brokeback Mountain. His technique in staying so close behind is so good it makes me think he's done prison time.

41' Juan looks like he has no idea what's going on; Mexes does not.

40' Borriello defending now. I feel like reading a bit too much into it, but I won't.

Awesome tackle by Brighi, results in nothing. Somewhat the story of the first half.

39' Biava attempts harikari by jumping into and over Adriano. Messing with brickish walls is inadvised.

37' Juan flies one long to wingback Nicolas Burdisso, but misses. There were several things wrong with that, beginning with the idea and ending with the execution.

Lazyo dominating possession at the moment, unfortunately. Or fortunately, so long as Roma continues defending...with the ref launching a Hernanes attack, smothered by Mexes.

32' That flubbed back pass by Riise early on was a smelling salt for his game, apparently.

30' I really haven't a clue how many on Lazio played over the weekend - not difficult research, I do realize - but they're running enough that fatigue looks possible, if not likely.

Greco with a nomimee for worst pass in club history with zero consequences.

24' Adriano is chunky, but skilled.

They're all doing a fairly decent job of holding onto the ball in the face of swarming challenges, but not so much in the next step of maneuvering it to the Lazio box.

23' Classic uninspiring first half performance, with the gamechangers off the bench for the second half, it appears (not so much by design as it is by repetition). The midfield just needs to do a little better or else it'll be with a hole.

21' Julio Sergio, derby hero. Oh my. That man never has to buy a drink in Rome so long as he lives, as he palms it off the line.

Burdisso kicked full on in the face by Radu....let's see some color. Damn, only a yellow. Very easily could've been red, and DDR's quite perturbed it's not.

18' Lazio corner, headed out by Borri; another corner, saved by JSB outside of the frame.

16' Biava with a handy interception, no dice.

14' DDR tripped, no call, Lazio break, Riise heroics. Arguably playing with nine on that break, if that, with DM/CB3 well up the pitch.

Mirko warming again. Hey, could we start this game properly already? Full team and all that.

13' Defense casually waiting for the offside which was not to come, Lazio loft it out of bounds.

Oh my - a shirtless Adriano on the sidelines. Roma working with ten.

12' Zarate dribbles out of bounds. Thanks for that.

11' Silly smooth Adriano wins the space, wins a corner, and has won another war wound. He's taking a beating.

9' Greco with a misdemeanor theft of...someone. He's officially 'my boy'.

Adriano is running like he has a load in his pants, which we can assume is either a byproduct of the shoulder injury or the Christmas ham(s).

6' Simplicio cleats Brocchi in retaliation like a proper Roman.

5' No less than 17 shirts surrounding the Bash Brothers of Borriello and Adriano, who's now hurt - shoulder thing, which didn't look terrible, but he's being stretchered off. Oh my. And Mirko's warming.

Well, so much for that idea. Or not - he's now walking, but in a good deal of pain.

3' And Riise forced into an early save.

This is good Roma; the Roma I expected - as in bad Roma in the first 10-15. Hot starts are the death knell to Roman dreams.

2' Riise with an early faux pas on the pass back to JSB. A nice stiff wake-up shot does well so long as no goal is scored (twasn't).

1' Lazio offside #1. Someone keep a tally - this could get good.

A moment of silence for Lazio's brief title run...

And if anyone's in the states...Ray Hudson. GolTV. Roma. As in, right now. And he's Romanista.

Adriano looking extra robust, and Borriello's hair is extra terrible. I feel a poker from both.

To be honest, I'm a bit shocked he didn't make the bench, actually. He's a wild card, and wild cards can be valuable in derbies, particularly when the card threshold may creep a touch higher than normal. (So...red card 16 minutes after entering.)

One must assume that Rosi not even making the bench in a derby in which Cassetti is hurt and Cicinho is drinking sangria means we're t-12 hours away from a press conference involving a raging agent, Bologna and stock in Kleenex brand tissues.

Just a heads up.

Pardon my exuberance, but dear Francesco am I on fire today.

(Well, either that or I'm firmly entrenched inside Claudio's head by now.)

At some point last evening this page remained blank with only the faint scent of genuine intent. At some point this morning, I awoke, page still blank, marked by the daze of a cruelly interrupted sleep cycle.

Like Roma during the derby itself, apparently I sleep through the first half only to then show up for the second, too.

Therefore I must work myself, and Roma, into a lather over the coming hours of anxiety, excitement and naplessness.

- One of the big issues of recent has been the rotation at the top of the formation and the simple fact that five strikers can't play at once. Problem eliminated today, with Francesco Totti having quietly excluded himself from Coppa Italia activities in the 2010-11 season.

That Totti, he's some soothsayer.

- Conventional wisdom, along with every paper in Italy, says it will be Menez, Borriello, Vucinic in some geometric shape yet to be determined.

Therefore now would be as good a time as any to bet the house on Adriano in the XI.

(You know a roam and a slight shift could easily make this a 4-2-3-1 going forward once more.)

- One of the above papers, Leggo, has Rosi in its starting XI.

Should that occur, what minute shall we conclude will mark his sending off? Fourth?

- Rumblings that Marco Cassetti may miss this evening's game, and in his place would be Aleandro Rosi.

Since the realm of possibility seems a bit closer, perhaps we should be a bit more serious about the whole 'walking red card thing'.

I think he'll make it to the seventh, maybe eight minute.

- We also retain the possibility that is wingback Nicolas Burdisso marauding up the right and whipping in crosses like an Argentine Dani Alves with a jetpack.