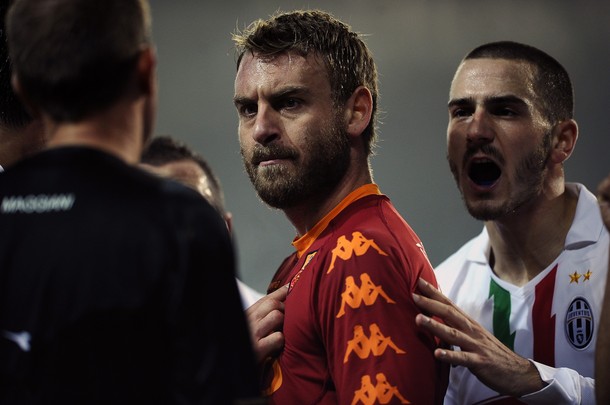 At this very moment as I lay the framework for what will be published several hours later (edit: I lied), I've got Milan v Sampdoria on in the backgroung, with a blue shirt playing rather impressively. So I mutter to myself "Why can't Roma get guys like him?" and put head back down to whatever nonsense into which I was originally immersed.

Name on the back reads Guberti.

Fortunately, very fortunately, quality in attack is not a want for Roma as we stand. I'm also fairly sure another half-decent attacking option would result in nothing short of Mirko Vucinic doing jail time.

Now, I'm in a moment of crisis, as tomorrow will likely be the first Roma game I miss live since the Basel debacle (the first one - should there be multiple? - in September of '09), at least I think. Rather fortunate I am that my schedule is my schedule and all that. However, appointments made in October which can't be rescheduled must be honored and so on and so forth. Meanwhile, the special battery for my spaceship-flight-deck-masquerading-as-a-smartphone hasn't yet arrived, and I don't know that I can bleed enough battery via streaming. Therefore I can try, and will, but will likely be in a state closely resembling Brad Pitt in 12 Monkeys as I debate checking the score or wait to watch the replay later on.

So in reparations for my battery being lost in shipping purgatory, I make a request of the gods: Roma wins. And not just this game. How about...all of them.

Because let's think about this for a moment: this would mean beating Lazio in a proper derby - derbies are derbies, etc. - and then Juventus, before likely meeting up with Inter in a semifinal and Milan in a final. In short, a murderer's row of opponents, the top of the tops in Serie A, in one cup competition (derbies grandfather in regardless of opponent).

Something of a mini-Italian Champions League.

I don't particularly care how it gets done or through which channels of Ranieri's many labyrinths of insanity, but this potential scenario, entirely exclusive to Roma, might just be better than a scudetto.

At least I'm willing to find out and report back, thank you very much.

Also: send my love to Luca.

The one time you actually want Mirko on the bench...

Christ is he terrible against Juve.

(RomaNews is doing maintenance, so this lineup is of is of my own choosing.)