Share All sharing options for: Derby: Everybody Act Real Nice 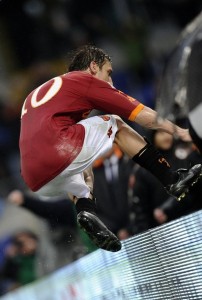 Roma was utterly horrendous and deserved to lose. The end.

And Lazio with an epic blunder, leaving the slowest man on the team to break the counter.

91' Burdisso concedes a free kick despite getting all ball, no player, but with studs breathing.

90' Stek on the save by thee tips of his fingers - being a giant helps.

89' David Pizarro is full into Julio Baptista Time Wasting Mode, but in the middle of the pitch. Exceedingly impressive, really.

Hey, Roma works a little something from a bit of pushing and shoving, as DDR snakes in on the other end to snuff the counter. Scarily exciting.

85' Incredible tackle by Heinze, who's now hurt. He's holding this team together at the moment, though barely holding himself together.

84' The whole general aura of Roma's play in and around their own box seems a bit too...casual. As though there's no sense of urgency. Which likely reflects in the infinite number of chances Lazio's had on net.

82' Speaking of something from nothing, Angel bursts into the box and crosses to no one. Pjanic, meanwhile, looks absolutely tanked.

Cisse off the post out of virtually nothing. Let's be honest: Lazio should be well ahead right now.

80' Angel's been nonexistent for eons, it seems. Ten minutes of hanging on while we try to do the same.

79' This might be Roma's first extended sequence of possession since the 10th or so. All for nada, but baby steps.

77' Cassetti yellow in the 77th. Were odds available on that today?

75' Free kick Roma in Pjanic distance - this is the first of the day for either team, it seems.

71' Cassetti saves the day from another cross getting to Klose. Jesus H, would somebody maul that man to death?

Klose off the bar from a header. Serious.

69' The evil forces of doom are setting up shop in and around the Roman box at current. This is less than thrilling with Klose in the area of an aerial ball.

63' There is no chance on this planet Jose Angel is older than 13. I also have a theory that those royal blue boots zap his powers.

66' The pace of the game - or rather the pace of Lazio banging down Roma's door - has deadened, thankfully.

Cassetti in attack during a derby gives me good jujus. Alas, Osvaldo's cross is too far ahead of Bojan.

62' Hey! It happened! Lazio got a yellow! (Brocchi, who should be off including that dive.)

59' There are extraordinary amounts of Roman suckitude being sprayed across the pitch at current. Something needs to change, because Lazio isn't far from a second as things stand.

57' Roma being put to the sword. Only thirty more minutes to hold on/hope for a red to equal things up.

55' Osvaldo had an epic first 20 minutes as Prince Charming and has suddenly turned into the ugly frog again.

And Stek on the save. Duck and cover.

53' The peno was inside the box, but it was an epic dive by Brocchi, yet utter stupidity from Kjaer.

Perrotta off, BURDISSO ON. I can't look.

52' Walking into the storm. They've played poorly, are down to ten and half the team is sitting on a yellow with one injury sub already down. Somebody hold me.

PK? It was outside the box. And of course, they equalize.

And there it is: Kjaer red.

48' And Kjaer fluffs one only for Cassetti to sneak in and save Klose from a 1v1 on net. Heaven and hell, that boy.

47' Radu is off, which takes an automatic red off the board in the final ten minutes. Damn.

46' I was wondering something - making parallels between Osvaldo this year and Borriello last year: After two scoreless league games, Borriello scored 5 in 7. Worth noting.

His hair also seemed to be on a downward trajectory as the year went on, not unlike Osvaldo's.

It's worth noting that Cassetti is due to be booked on foul accumulation based on that epic kerfuffle with Hernanes' shirt shortly after coming on.

Truth be told, Roma's not playing particularly well and [pick a Roman] is just begging for a red card.

But it's a derby and they're winning, so it doesn't matter right now.

Hernanes is doing everything possible to be as selfish as possible.

44' Osvaldo being pushed well beyond the touchline and resulting thought process. "He's remarkably calm during a derby. Though he is on a yellow. Oh, he's probably stoned."

42' Cassetti just misplaced a pass and Enrique had an aneurysm on the touchline.

(The latter is more implied by the former rather than known.)

Tagliavento's throwing picks for Roma. How about throwing some yellow cards Lazio's way?

40' Bojan's a tenacious little fucker. And Osvaldo's taken down. It's like hack-a-Roma all of a sudden. I mean, they're technically skilled, but they're not Barcelona. (And somehow, Lazio doesn't have a yellow yet.)

There's another body down.

Well, if you had Rosi exiting the pitch during the first half of a derby....be honest, a lot of you did.

Marco Cassetti is warming up. No really.

33' Rosi's now down and holding his ankle. Get up. Marco Cassetti's on the bench, but he does not exist. At least according to LE.

Bojan is stringing passes, making runs, acting as medic, facilitating peace treaties among warring nations...he's putting in a shift and a half today. Get that boy something which indicates the passage to manhood.

31' Lazio bodies finding lots of ground in the box. That's all I'm saying.

30' I think Maaarten may be winning the battle of individual time of possession. He's sitting on that ball quite a bit.

I hope people are warming up. Beyond anything, there's this palpable sense that the XI on the pitch for Roma will change soon. Or perhaps become something other than XI.

26' Angel on the run...and Osvaldo dampens his legend by fluffing a sitter. He really was playing too well.

DDR yellow. This team is going down to ten soon.

(Supremely harsh yellow for a derby.)

26' I always really like Klose. Then he signed for Lazio. Now I'm pretty sure he gives AIDS to little orphans.

24' Hernanes is lacing shots from 30 wide of net. I suddenly miss seeing Zarate on the other side.

22' Perrotta's looking at a sub before he gets sent off here. He's playing with yellow fire. Which is something you'd more expect from Borriello and his lineage of ex-girlfriends.

20' Osvaldo's back clearing balls out of the box. He's turning into a legend in the span of minutes today.

18' Also, Osvaldo's shirt overshadowed the pass by Pjanic for the goal. That boy is silk.

17' Starting to get more of that "derby-type tactical feel" about proceedings. You know - less "formation", more FUBAR.

16' August 25th after waxing on my distaste for PDO:

....acknowledging that someday, I’m really going to like him.

That day is today.

14' And Bojan nearly skates in again. I think the more one looks like a 12 year old, the better one plays in a derby, because Angel's lights out too.

13' Lazio are now apparently aware there is a game going on. Shame, that.

11' And Klose does the same down the other end. Of course it was Cisse causing the havoc while Roma's defense scrambles to get back in position.

9' And Perrotta skims one just by the post. A foot wide, if that. Lazio are staggering back right now. Go for the early kayo.

That man never has to buy his own dime bag in Rome again.

6' He also got yellow carded in the first six minutes of a derby for celebration. Not smart. Save that for Achilles-shredding tackles. Like the one for which Perrotta was just booked. Yeesh.

That homeless man is my new hero. Lazio just stood there as Pjanic dinked a ball high and he was in with nothing but space.

4' The first four minutes of this game can be aptly described as 'lots of bark, little bite'. And Aleandro Rosi hasn't been sent off yet.

2' Someone needs to check Osvaldo for an illegal hairgrowth formula. It's only been two weeks.

1' Are we still working on the theory Maaaarten thinks he's Gigi circa 2005? Good.

Ball ricochets off Bojan for a non-shot. Clearly he's not been in Rome long enough to learn the Rodrigo Taddei off-the-mug method of accidental derby goalscoring.

Forewarned: Not enough sleep, too much coffee. The perfect recipe for a shitshow.

I'm pretty crushed Simplicio's not in the lineup. Though maybe Lichsteiner's arm needs to be present to evoke his magical derby powers.

For comparison purposes, two of those players were on the pitch during the last derby. Three were actually on the team.

A simply insane amount of turnover.

(For anyone just jumping on the 'foreign team has wealthy owners' bandwagon, I've set in bold those with an exceedingly high chance to get sent off. Impress your friends with a pregame prediction and then watch it come true.)

Combing through internet files of derbies yore, mostly the last one, I've come to a startling conclusion: this team looks exceedingly different than the last, oh, five or so.

I realize it's a bit late in the game to stumble upon this epiphany, what with it being the middle of October and all, but it nonetheless remains - the past matters not.

Unless Marco Cassetti would like to spawn some more tunes.

And in case you've been paying attention today, the chances this thing ends nil-nil land somewhere around 92%.

Proposed. Obviously. Because it includes Marco "Luis, why don't you love me?" Cassetti.

I would be flabbergasted if Lamela were to make his debut coming off injury in the derby. Flabbergasted isn't a strong enough word.

(I see no reason why Rosi won't be playing, unless Luis has a firm grasp on both "Romans in the derby" and Aleandro's base temperament, not to mention the combination of the two. In which case....Cassetti it is.)