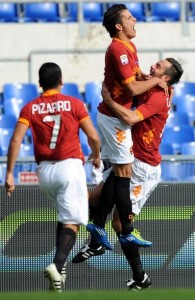 Okay, apparently being pulled from the room for a minute equates to a half hour or more. And Roma lost. Apologies on several fronts.

Mostly I'm crushed that I had to run as soon as Greco came on.

60' Bojan looks to have dropped back a bit to start here. Ball skirts through the box amidst 400 bodies, but doesn't find a white shirt.

59' Stekelenburg really loves playing fast and loose with the passing and ball at his feet in the box. Such an Ajax product.

Greco for Lamela and Osvaldo for....Pizarro. Well then.

58' Frey felines a header from Lamela off the line again, as Gago hits one wide.

57' Leandro's getting ready to come on - bestill me heart. And complete and utter irrational bias aside, his style does fit into this system.

54' Lots of running and hassling in a short space near the benches.

Sermour off, Kucka on. No yellow cards on the pitch.

52' Bojan dummies one to Frey. Not sure that's practiced.

51' Lamela has more composure for a 19 year old than I've ever seen. Ever. His heartrate under pressure is hovering somewhere around 'get the paddles'.

50' Pizarro lofts what is a wasted cross, but probably would've found one of the two true prima punta men.

Oxygen and a crutch for Rossi, who's close to a more natural death.

48' After several minutes of last rites, Palacio is up and play is on.