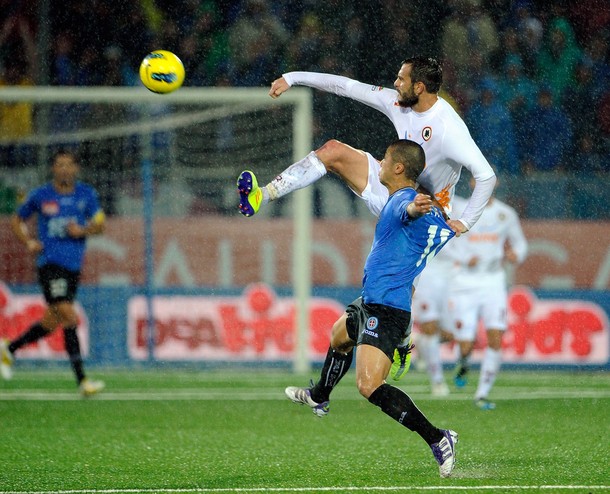 I took a few things from the game on Saturday. Or Sunday. Possibly it was Monday. Anyway.

Roma took three points - the basic maths of 2 > 0 got me there - which is all that really matters right now.

i. The quality of Roma's play was directly proportional to the quality of the weather, which may be more: "Novara had 45 minutes in the tank when said tank is being drowned by the falling heavens." It's difficult enough to watch the merits of a technically-based team in such inclement weather, much less judge them.

Or maybe they got an arse-chewing at the half. Either/or.

1. A central defender unanimously approved by an independent board of cardiologists.
2. A beach chair. And I want that beach chair to be placed on the opponent's spot inside the box. And I want Pablo Daniel Osvaldo to sit in that chair, and he may only get up to toss it out of play when the ball enters the opposition's half with Roma in possession. And he still doesn't move from that general vicinity of the box. And once the play is done and he scores with his head, he sits his ass back in that chair with some Cheetos and a suspicious glass contraption.

This would likely be frowned upon by those in the league, but I see no reason his shirt can't be lined with wires which send a mild electric current every time he tries to leave the opponent's box. Or misses a sitter.

Where's that team psychologist when you need him?

iii. The one general thing of notice - aside from Marco Cassetti's pact with the devil and impending forced retirement via capping with a bicycle part by a slight man with a suspiciously Asturian accent - is that Luis Enrique's substitutions are, when his hand isn't forced, as it so often is, rather effective. In fact, they're very effective, and increasingly so. Which leads one to think his understanding of the working machine that is Roma is improving (as expected), as well as his adjustment to the inherent differences of coaching in Italy rather than in Spain (as expected).

Thus mark down January 28th on your calendars - the schedule will turn over for Round 2.

The real problem lies in that he seems to be powerless against the first half injury and/or one of his defenders doing his absolute damndest to get sent off (which is actually within his powers, as they're criminally exposed quite often). Nevertheless...

I see approaching Kappa with this electrical current idea the only way to go.

I don't make the soundtracks, a'ight?