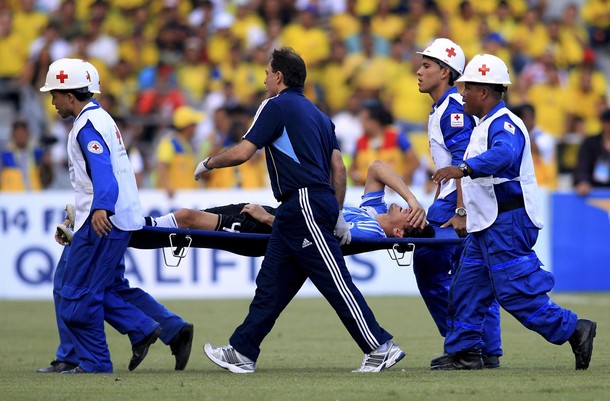 For the last couple years, there seemed several absolutes during international weekends:

i. We'd all get to sit around and nap and do productive life things and possibly remember that we have families and significant others and maybe even a job. You know - contribute a little to society.

iii. Juan would somehow break himself.

And then this happened last evening, making me believe that no Roma central defender should be allowed to go on international duty ever again. Which is funny, as they were, until recently, DDR aside, the only real "sure things".

So tie a bow on Nico's season, because it's over.

There are several ways to paint the picture that has been AS Roma's defense this year, but this seems easiest and most comprehensive: The only moderately consistent defender for AS Roma is now out for six months. They always seemed to need another defender in the winter window - now it seems like they may need to restructure the entire backline mid-run.

More importantly, there are now six games until the January window. Those six games include Lecce, Udinese, Fiorentina, Juventus, Napoli and Bologna. The pre-Christmas affair at the San Paolo is already inducing flashbacks and it hasn't even happened yet.

No, this might not be pretty for some time. Clearly they need, once again, a hero, possibly of the supernatural variety.

(Also, someone slap a pair of cuffs on Maaaaarten so he doesn't abandon ship.)