Defense Is For Losers

Share All sharing options for: Defense Is For Losers 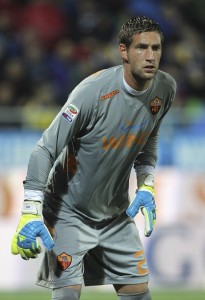 So Roma just lost away to the team which went top in November.

Surprises? Nope? As you were.

90' Four minutes added as Udinese nearly gets a PK for their cherry.

88' Di Natale off, Pasquale on. Not a defensive move. Nope.

87' I sort of wish instead of buying up all these new faces in the summer, ownership had purchased Udinese instead and pillaged the quality while using the rest as a reserve side.

Well, at least I'm getting good at this - Greco off, Simone on.

84' Promising move made a bit of a mess by Greco, who's been poor since, well, the game began, yet Luis Enrique refuses to bring him off.

82' Gorgeous free kick by Lamela - unfortunately, it was all looks.

He's good. Udinese's good. Leave space behind the defense and good things happen for them. And Kjaer was injured in the process, so here comes Marco Cassetti to play CB - which is exactly what you want when down a goal with less than ten minutes remaining in regulation.

I'm going to shut up now.

79' Juan's far and away Roma's best player at both ends of the pitch tonight. (You'll find this under Recipes for a Scoreless Draw.)

77' Great and promising run into the box by Lamela; problem is he RSVP'd it.

73' Did you ever think you'd see the day when Bojan Krkic was booed for coming on as a sub in Udine? Because we're there.

72' Greco now causing problems for Udinese, which is a massive improvement.

Gago off; Supersub on.

69' Greco's causing some problems again. Problem is, they're for Roma.

67' Fabbrini on for Abdi as Pjanic wastes yet another free kick. No signs of imminent substitutions on the red side of proceedings.

63' Stekelenburg stonewalls in the six from the six. Viva la vida, motherfuckers.

61' Osvaldo cuts in and fires over with five striped shirts in his view. The fact he didn't hit a body should be considered an astonishing achievement in and of itself.

57' FREE GRECO is looking to be chained up again.

51' And back the other end. Who needs midfield defense?

50' Pinzi crosses to Slovenia; Greco being a nuisance - for both teams today.

Odd break down the other end as Lamela works into a 1v1 at an angle but allows it to become 2v1.

48' Juan misses a goal on the wrong side of each post on two straight corners - the defense aiding a bit on the first.

47' DDR gets warm with a dipper from way, way back. When was the last he scored one of those? Years?

The backline's actually been rather good - Angel constantly being sieged - and the midfield's getting better, but Udinese's just the better team right now.

45' Armero saves the day for Roma. Or Toto. One of the two got in the way of the other with Stek at their mercy and not a Roma defender in sight.

And Roma go back the other way with Pjanic having a terrible shot as Osvaldo was to his left - don't see that very often.

Positive signs heading into the half.

Abdi fires one right at Maaarten after Roma's gets worked down in its own area.

37' Roma's best movement of the night results in Lamela flicking on to Casper the Ghost, playing centrally in the box.

35' Frantic battle for battle at the half. Roma wins, then gives it right back up.

It's entirely likely Greco gets subbed off at the half. Lamela's on the list too.

34' Roma's midfield isn't playing what one might call 'well' at the moment. Or all night long.

32' Floro Flores is on the bench, by the by. In case you needed any further reason to fret.

30' No shots in the first half-hour. This is not the successful execution of attacking football.

28' Isla knocked by Greco. I see the strategy for today is use up all Udinese's subs by the half via injury.

25' Possession Stat Mafia joining the game a bit more as....Udinese counters. This is getting old, ya know.

(A hefty sigh of relief we aren't watching Heinze rumbling back to defend.)

23' Udinese offside yet again, just by a smidge, and Isla had hit the post anyway. So Roma versus Udinese's counter - not good for your healthy.

PDO clipped and Benatia hit with yellow as Osvaldo was off to...being closed down on quickly.

...which then allows Udinese more pitch with which to work and accelerate into. They're quite good, you know.

19' The pace and quality deadening rapidly as Roma's possession increases...

Off goes Domizzi by the power of Pjanic's sorcery. Or his wonky upper leg area. And an ex-Roma boy coming on for the Roma fan - Ferronetti. Well isn't this just a nice little reunion.

14' Pjanic murdered by Domizzi in the center of the pitch; Miralem would like the death penalty.

Osvaldo dispossessed in the box, which, if I'm, correct, is the first time Roma's made it inside the white lines.

12' Isla's having an absolute field day on the right thus far; in fact, all of Udinese's moves seem to be concentrated on the right flank.

Note them trying to play away from Rodrigo Taddei.

10' The pitch is officially slanted. Not the right way, either.

8' Erik's so silky smooth. lacking a bit of polish.

Kjaer saving the day from Toto running in clean to the six for the end of a cross.

7' Basta's everywhere, but so too is Juan.

6' And there's Udinese on the break with an offside, which would've been a clean run on goal if Armero had let Abdi take the ball. Hip hip for poor decision making.

4' Udinese pressing possession rather high in the Roman end right now. Well that's not how this is supposed to work.

3' Roman midfield being dispossessed rather easily at the moment.

1' Angels already being put to work on the back end.

Also seeing early glimpses of LE following in the scarf-wearing footsteps of one TGIP. Promising, but he doesn't hit legend status until he can successfully wear three simultaneously. Or have such a glorious sheen on his bald head.

Two players in the XI born in Italy, for the record. Sort of expect this to become the rule, rather than its exception.

For some reason the game is being delayed; I presume it has something to do with the objections of Rodrigo Taddei being the best defender in the stadium. (Kickoff is at 2055, says RN.)

Angels, enjoying an appropriate falling from the heavens, is being brought on as something of a defend-with-the-attack move. Very aggressive, and I like it.

Also. Roma's playing the team one point from the top in November, and the defender I have the most faith in over the course of ninety minutes is Rodrigo Taddei. (Juan's a slight breeze from a pulled [insert muscle of choice here]; Kjaer's had difficulties staying on the pitch for disciplinary reasons, either being yanked by the ref or Enrique; and Angels is a wingback at absolute best. Not that Taddei's anything more.)

Also also. Who plays on a Friday? And more to the point: why don't I know these things til last moment?

I'm going to statificate things real quick: In terms of pure numbers, Udinese has the best defense in the league.

This, on paper, would seem like one of those games for the neutrals and nitro. It very well may be, considering how well Roma played in the friendly against Lecce* leading up to this slightly brutal run heading into the holidays. Turns out, it's just another game against First Half Udinese. (Few years ago they were in first rather late into the fall, yeah?) Though they're more just Whole Season Udinese right now, seemingly, despite their consistent claims of attempting to "stave off relegation" - stop it.

* - Relative to the upcoming competition, identical nicknames, their best player and goalkeeper are on the payroll, Taddei playing @#$%in' lights out in defense...it just makes sense.

But games are not played on paper, or else Roma would have scored about 50 goals and conceded 49. They're played here, where some of us occasionally live, in the real world. Thus it's likely to be supremely titillating and frustrating at the same time as two teams which, on paper, look to be attacking powerhouses swashbuckle to a nil-nil draw.

Of course, reverse psychology may not be needed considering the projected defense: Perrotta, Kjaer, Heinze, Taddei.

Cardiac arrests surely to be bountiful today, as Udinese is a far cry from Lecce. Prayers for Maaaarten.

Where's Giuseppe Scurto when you need him?