He Said, She Said

Share All sharing options for: He Said, She Said 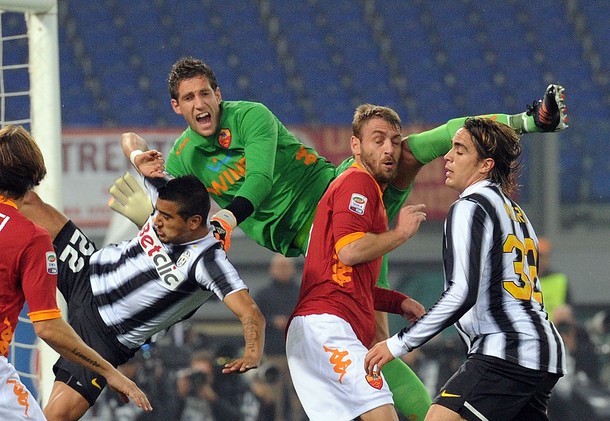 No one has ever claimed the interwebs to be the breeding grounds for a consensus, but this year's edition divides like few in recent times. If you've read the pixels, Roma was both pretty good and pretty poor, unlucky to not have won and lucky not to have lost, with individual performances - most, anyway - equally as scattershot.

The problem is everything is, at current, relative to expectation. Taking a point off Juventus is a pretty rousing success considering their form and position in their table, but their form was nowhere to be found that night. Of course then there was the penalty, a chance to win gone begging which could be chalked up to Roma yet again falling to an Italian keeper (this one slightly above average). Yet Roma's actual goal was nothing more than exceptional failure on the part of the opposition. Then again, Juve's was also fortuitous in its own way.

Through which lens do you even dare view this incarnation?

Neither team played well and neither team played poorly; Juve had more chances, but either made nothing of them or met Maaaarten on his game. It wasn't illuminating in any way, since Daniele De Rossi playing CB is somewhere around option pi-squared and though Viviani did well, debuts typically go much better than the ensuing run of minutes. It was....well, it just was.

So we'll do this easily: Roma took a point off a team in the top four for the first time, and having played seven of the eight teams in front of them on the table (waiting on the San Paolo - delightful), they have four points from twenty-one. It's pretty clear where they stand in the pecking order right now, so take anything one can get. A draw against the leader, no matter the manner, is extraordinary success at this point.

More of weathering the storm until the turn of the year. Upcoming: [Insert some well-known storm from the epics here.]

(And tell me that photo wouldn't be perfect as the model for a Renaissance era painting.)

That Guy With A Growing Affinity For Courting Trouble

Two weeks ago Osvaldo learned he wasn't Maradona. Perhaps this week his should learn he's not Totti either. Hell, he's nothing more than an above average striker. Most of his goals were lucky, if he deserves credit for being in the right place at the right time, while his second half play against Juve wasn't terrible.