The Son of Man Indeed

Share All sharing options for: The Son of Man Indeed 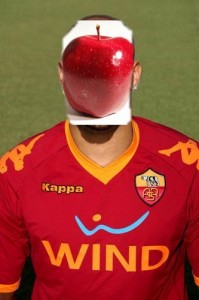 Excellence, up and down.

87' Maaaarten finally being forced to earn his paycheck, now grabbing his shoulder. Always excellent for a keeper.

86' Mudingayi has the technical skills of a grapefruit - all apologies to the grapefruit.

85' And Bojan so very nearly fed through. His goal's coming - don't fret.

Osvaldo genuinely can't do anything but score goals. Pretty good skill to have, mind.

82' Totti shoots high. Again. Somebody buy that man a goal.

79' Bologna sub, down to ten. Expect 10+ minutes of Roma knocking it around the general vicinity of deep midfield and defense.

75' Kone goes down in the box by Rosi, no penalty. It was definitely a penalty.

Perez yellow. Portanova sent off, actually. For what, who the hell knows. Words. This shit's getting out of hand.

74' Osvlado powers a shot high when he should've dropped it off to Bojan. Because I said so.

72' It's late and Diamanti's left peg just decided to show up. These aren't good parallels.

FREE GRECO. Pjanic off after excellence.

71' Bologna would probably be better if they had some better players.

70' Yellow for Kone, who is both not from the Ivory Coast and has some very swashbuckling facial hair. Not quite Osvaldo-esque, but it's decent.

68' Bojangles is coming on to fulfill my prophecy. Erik off.

66' Every single time Mudingayi passes, he makes it seem as though it's the most difficult thing he's ever done in his life. It's entirely possible it is.

And Maaaarten palms a bomb from Diamanti, so hard it almost went in anyway.

63' A few years ago Mazzone said Totti should move to a Pirlo-type position in deep midfield later in his career. The lineup won't reflect it, but he's been sitting there in this system.

61' Pjanic has been quietly brilliant with all the little things.

As he shifts it to Osvaldo, firing just wide.

60' And Lamela again, this time saved by Gillet. Apparently Erik does have a right foot. Didn't realize that came in the deal.

59' Jesus 2.0 tries to chip Gillet and steal hearts forever, but the angle is tough and so too is his execution.

56' Roma's playing keepaway in the Bologna half like a good little Possession Stat Magia. Bologna attempts to go back down the other end and fail miserably.

53' Gimenez is already causing problems with his width.

52' Apple wins a free kick, still looks like a velociraptor. And Totti puts a brilliant ball on net, saved by Gillet. Barely.

51' Diego Perez is making solo attacking forays. Yes, this is the recipe for pulling even.

49' Given the score, timing of the fixture (pre-Christmas after a weekend game) and general overall feel of the beginning minutes of this half, I suspect the next 40 minutes or so would be a solid time to either nap or finish up some shopping.

Ramirez off for Gimenez and Mudingayi on for...missed it. Does it matter? It's Bologna.

It's worth noting that if Gillet was 1-2 inches taller, this game would be scoreless.

44' And both teams all of a sudden decide to play for Christmas, with Totti sending a pass into the packed Roman box and (someone on Bologna) sending a pass off a teammate's ass.

42' I've decided we need to just call Osvaldo 'Percentages'. Because he's not a great player, but given the structure of the team, he gets so many chances he's bound to hit on one.

41' Nice and simple. Osvaldo splits the defense with a hard shot from 16 or so.

And there he goes and makes up for it. 2-0. This game's fucking over.

And Osvaldo thieves a back pass, but missed the empty net after shaking off Gillet. A difficult angle, but €17m men need to hit that every time.

37' Stupidly wonderful ball by Pjanic through the box after a Lamela run, dinking the ball and trickling down through the defense, crossed back through and volleyed high by FB.

This team does have its moments.

35' Bologna might set the record for 'bullshit little fouls' today, which is really impressive given Genoa of recent years. And, you know, Bologna.

32' Continuous little 'moments' between Gaston and Daniele, which leads to the possibility of a forearm shivver from DDR a little later on. The only question is sleeved or not?

30' Totti continues dropping lollipops over the top for Rosi to run onto, and it's surprisingly effective. (Not this one.)

28' FB pounds one off Gillet's mitts, a la Totti, and Rosi crosses the eventual bound into said mitts. Totti, Osvaldo and FB are working well as they read right to left in the box area. Second type move which has ended well.

27' The last several minutes have been far less than titillating, instead making me wonder where I rate this Bologna in terms of derision as opposed to those of years past. (Answer: they're palatable.)

24' Rosi goes down in the box, waves his hands, using the universal signal "I was fouled, you imbecile." but is dismissed.

21' Taddei stonewalls Gaston. Outside of Daniele and Maaaarten, which I think most saw coming after the defense was "constructed", he might be this year's best/most important player thus far.

Rosi yellow now after Diamanti was handed one. Cards are flying fast and loose.

19' Gillet's nice, but that goal was a perfect example of why you like your goalkeepers to be a little bit taller - preferably sized Maaarten.

Rodrigo Taddei side volley for the 1-0. Read that again.

16' Roma's been busy knocking it around the back. Now Rosi's won a free kick on the right.

14' Sort of getting the feeling Osvaldo might get sent off today. The good thing is this will go completely unnoticed unless he does, at which point it'll look brilliant. Win-win.

Though I'm less displeased with his decision making skills on the fly, as Diamanti shoots from nowhere to nowhere.

10' I wouldn't mind seeing Gaston and Erik in a Christmas tree behind a center forward for a few years in a few years.

You can sort of see why it's so difficult to buy capable defenders when the fantasies are so bountiful and possible.

7' Osvaldo yellow for defending like a center forward. Little harsh.

6' Gaston's yapping at DDR for something or other. Possible the extreme offense to his continued refusal to cover up his right arm with an appropriate amount of fabric. Can't say I blame him.

4' Roma's making base camp in the Bologna half, and Totti places one in the steaming palms of Gillet. Lovely work in and around the box.

2' I can't decide which I want more for DDR: a new contract or a second sleeve.

1' My goals for today are to someone land three points and somehow land in Rome with Gaston Ramirez as carry on. If for no other reason than the fact every team could use a Gaston.

No one cares to play football yet. And oh, it's Bologna away, which means the return of the red shorts-white shirt combo o'hideousness. And Rosi's wearing bright yellow boots, which makes him look something of a McFullback. The Americans must be proud. (Nevermind, it's Lamela with the boots. Nonetheless, I stand by my assessment of Rosi being a McFullback, but for different reasons now.)

Wonderful silver lining: 2011 is 90 minutes from being over (the Gregorian calendar can go fuck itself, really). And most of it never happened. Swear.

Or: Lamela of my eye.

Major technical hangups and the fact that Armageddon is surely imminent have thus far prevented me from viewing anything beyond the first five minutes of the Napoli fixture. Nothing can prevent my increasingly unhealthy attachment to all things Erik Lamela. Silk worms look at that which his feet can spin with envy.

(I think that's actually iTunes. Which would make a lot of sense as well. But it came under a Google Image search of Lamela, which also makes a lot of sense. Aren't multiple interpretations wonderful?)

Remember when Angels was Jesus 2.0? (Well, if Jesus was a leftback, which he most certainly wasn't.) Now he's Rodrigo Taddei's deputy.

Don't think about that.