Make Love, Not War. Or Losses.

Share All sharing options for: Make Love, Not War. Or Losses. 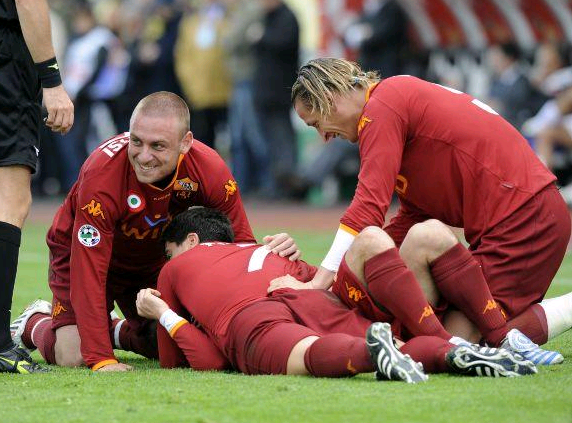 Also, I was looking for 'that picture' of Simone Perrotta leapfrogging a Roman manpile as evidence of team love, but I quickly came to the realization searching the internets for varieties of "Roma love/leapfrog/manpile" on a Saturday night was not in the best interest of my search history.

Anyway, despite apologies and fines and pizza parties, there is one real, genuine concern now creeping up; a concern which has been paramount since the very beginning, as mentioned ad nauseam: What happens when the finite patience of the players hits its ceiling? (Some start hitting teammates, apparently.)

And now Fiorentina without that Mihajlovic fellow behind the bench, missing him by merely a few weeks. Surely this is is payback for being fortuitous in the cancellation of the opening week. Either that or their gleeful fortune of seeing out Napoli's Roberto Donadoni Experiment a few years back. Certainly not a task in the impossible, but not as cushy as it could be.

Fortunately, Jesus is back, replacing someone due to a momentary god complex.

Probably not how it was drawn up in August.