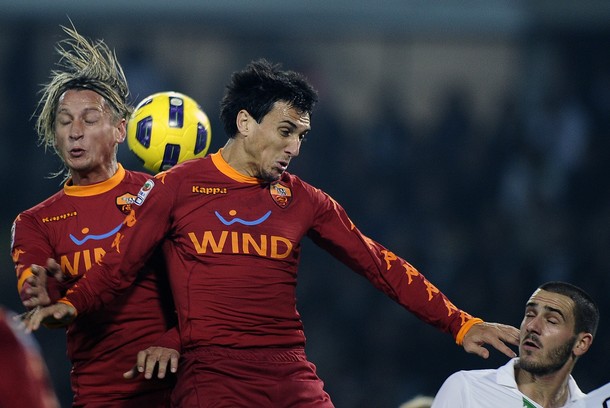 Did you miss this? Did you miss the positional panic? Did you miss pondering which of Rosella's aunts was going to slot into central midfield, how many goals Simone Loria would ship, or whether Prade can really play leftback?

Of course this little crisis isn't down to Drill Sergeant Spalletti, but thanks to Burdisso and the Blond Bombshell with the type of stupidity which nabs you gonorrhea from a tractor seat. Central defense is comprised of options...

...and likely in that order, without having stumbled over to Roma News. (Update: Stumbled, unwillingly, and I look to be at least partially right.)

And on the other side we have Napoli, spearheaded by Edinson Cavani who, aside from making Rodrigo Taddei look like Miss Universe, has scored roughly 472 goals with his head this season (done quite a bit more than that, too). So it's no bother that Roma's two elite aerial artists will be in the stands, one featuring highlights and the other a permascowl.

There are other issues at hand - such as this being one of those derby things - but this is of supreme importance. First three on the list, even. There were rumblings of De Rossi in defense, but that's happened only once that I recall - Udinese in '08 when he replaced the wonder of them all, Simone Loria, at the half, and had us all begging for a Loria return by the end of it - and without success.

Of course we've all seen Marco Cassetti play in central defense, and in related news, seen our requests for therapy reimbursements rebuffed. And then there are the backups.

This is going to be ugly. Real ugly.

They very well might win, but no less than 6% of those spectating will lose their lives to myocardial infarction by the end of the ninety minutes. Claudio had best hope his midfield is the boss of all bosses, or they score no less than nineteen goals.

Simone Loria can jump and at one point, before he lost his powers, was an aerial specialist. Though what he'd do the other 90% of the time is beyond me.