It's Not The End Of The World, But It Might Be. (Part Whatever)

Share All sharing options for: It's Not The End Of The World, But It Might Be. (Part Whatever) 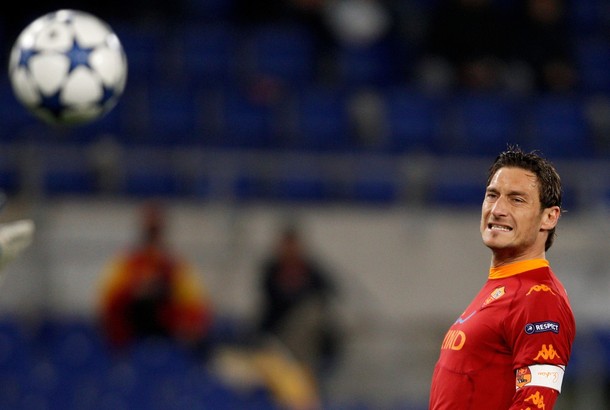 Everything Mircea Lucescu said seemed to resonate, particularly this:

"Roma live under great pressure, I don't understand the fans' jeers, it's tough to play under these conditions," he said.

"In the second half Roma played really well so you can't blame them for anything.

I'm going to do something here, and I don't imagine it will be particularly popular, nor received particularly well, but that doesn't make it any less true. And it's genuinely directed that-a-way - to the stadium - with no intended targets.

I've long thought quietly, even silently, that the worst part of Roma was not its mentality or its coach or its tactics or anything which happens between the walls of Trigoria, the locker room or the thin white line, but rather the fans. The fans, the ultras - all of it. Watching this game today was horrifying for me, and I can only imagine the way the players felt on the pitch; not only alone, but fighting both a very good football team and their own fans.

The demands these "fans" place upon the players are absurd; they're humans, not heroes flown in from Krypton for the services of this beloved sports team. The booing? The protests? The inalienable right to trophies to which they hold no credit? Wanting the head of anyone and everyone when they can't truly pinpoint a tangible problem? Who the hell do they really think they are? Fans have no right to demand the players win for them; they play for the coach, the team and the men sitting alongside inside that locker room.

Hearing Roma booed off the pitch in the first half was wholly depressing and, unfortunately, aptly summed up the fandom: mindless idiots. Was the team hugely at fault for the shot which deflected twice on the first goal? Is Douglas Costa not the same player dubbed the new Ronaldinho, Robinho, Pele, Easter Bunny, Jesus H. Christ, etc. and was his goal not indicative of such? The kid's a phenomenon for a reason. Does anyone really believe John Arne Mata Hari really wanted to slip and gift a third goal? He's not without his faults, but that man has run his heart out for this team for three years with hardly a backup on which to rely. He's the consummate professional who deserves nothing but the highest of praise for his ethic, and put in one of the most extraordinary performances in recent history in the last AS Roma Champions League knockout game.

How quickly they forget.

This is a team which completely dominated Shakhtar in the first stanza, in the second stanza and were hardly just showing up for their paychecks. No one on that pitch was out there stealing money or disgracing the shirt. Shakhtar's a good team which took advantage of mistakes and proved, as everyone knew, rather difficult in numbers, space and whenever one of their uber-talents found the opportunity to flash their individual skill sets. This was not Roma's day.

There are problems both large and small with this team, obviously, and the glazed look permeating the Olimpico air after the second was neither surprising nor particularly uplifting, but the environment which surrounds the club amidst even the slightest of slip-ups is no less guilty. Is showing up with banners at Trigoria the smartest use of passionate energies? Is booing the team off the pitch, during a play or simply booing your own team at all in any way helping matters? Unless it's coming from the opposition's fans, it's just not - ask any athlete.

And it's not just Roma fans, to be fair. It's Serie A, it's Europe, it's the world, and it's every sport imaginable, save for curling. And golf, which isn't really a sport anyway. It just seems that with the Roma fandom, there's just a little bit more, things are pushed a little bit further, and the end of the world is just that much closer, possibly because it is. (Which, if you hadn't figured out by now, has been my not-so-subtle dig.)

They say this club has some of the most passionate fans in the world, and I can't but agree on this unfamiliar and completely unbiased (clearly) perch. However, passion is good when channeled properly; lethal when not.

I don't particularly care if Rosella or Ranieri or Taddei or Burdisso or the shirt guy or the housekeeping staff needs to go. Shut up and support your team, or else they're not really "your team", are they? You'll be amazed at how much more productive a positive aura is than one of negativity and fear.

Roma deserves its fans, but I'm not sure the fans deserve Roma.

i. These are two-legged affairs, and AS Roma always has a puncher's chance. No one does drama like Roma, it seems.

This is not Manchester United of three years ago; this ain't over by a long shot.

ii. Francesco Totti turned in not only his best performance of the season, but one worthy of vintage status. It's plain as day Totti has not been in form this year, and age is, of course, the first dubbed the culprit. Not mine, but it'd be impossible to separate the two: mobility.

But of greatest concern was his passing. It was awful. Not just bad for Totti, making him better than just about anyone on the planet, but awful period.

The gods can take away his mobility. They can take away his strength, endurance and anything else which surfs along the sands of time, but when Francesco Totti is six feet under, he's still going to be able to backheel a blind pass through the catacombs to the rumbling sticks of Simone Perrotta, still streaking towards the goal, his eternal heaven. The body may go, but the skills, the passing will not.

He's not the Totti of old, and likely never will be again, but he's not the Totti we've seen thus far this year. There's far better in those creaking bones, and on Wednesday, all those skills returned in one crashing tide.

Not just a silver lining on an otherwise gray day, arguably the best sign of the season.

But fuck you, hope.