Let's Try This Again, Shall We: Brescia.

Share All sharing options for: Let's Try This Again, Shall We: Brescia. 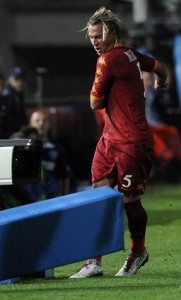 Things Roma would have if they could defend weak sauce crosses at the far post: three points against Brescia and possibly a scudetto.

Borriello manhandled in the box. Shirt tug, clear penalty and he's both incensed and hurt.

Boy, they are living the golden life, aren't they?

And there's no way this whistle should be blown at the 93rd mark, but it likely will.

89' Marco Cassetti leftback scorched, Lanzafame off the post. That was a loss awaiting.

Zebina down, dead again. This could take several hours.

88' Menez crosses, and nothing. They appear to need a moment of...corner kick here.

84' Setting the stage for either unnecessary heroics or a brawl after the match here.

82' Mirko's been up to his usual bottom-team tricks - like a ghost.

Brescia make what I count to be their seventh substitution of the match.

80' Fairly sure that no one has even touched the ball even half as much as Cassetti today. This is not a recipe for scoring beaucoup goals, it must be said.

79' Worth noting we've also yet to see the much despised average Italian keeper heroics against Roma.

78' This game may call for an Adrian Pit cross and an Okaka backheel.

Fairly sure about three plays have transpired in the last five minutes. Brescia timewasting like no other - and there's a booking for Arcari (75th? Really?) - but generally, De Marco seems to have no interest in speeding up proceedings.

74' Juan over the bar. This time it gets a deflection.

71' Brescia's tactic of 'let's make them think we're utterly awful for seventy minutes and then be mediocre when they've gone to bed' tactic is working.

Taddei putting on the Alice band. Like He-Man strapping on his shield.

70' Genuinely a goal from nothing. For roughly 60-odd minutes. So we can hold off on that Taddei countdown and now await the patented AS Roma Late, Late Show.

Never seen that before.

Lanzafame on for Zanetti.

65' There are times when it appears the left wing runs Vucinic-Menez-Riise. This formation is the tactical equivalent of a Rorschach test: there's neither a right nor wrong answer.

Alfalfa hammers one off the bar. So very nearly.

62' Solid communication being displayed between Brescia's keeper and defense.

And is now a good time to begin the Rodrigo Taddei countdown? t-7

60' See: the worse the hair, the more he scores. I bet there's another goal somewhere in here for him too.

Poor/no clearance, boomed off the underside of the bar.

58' Cassetti is being given an entire half of the pitch with which to work. Wherefore art thou Cicinho?

57' I was looking prescient until the realization that Brescia's counter was launched by one Jonathan Zebina.

That too has a built-in self-destruct mechanism.

55' I like that they're playing the 55th like it's the 95th, but it does have its inherent dangers. Like such monsters as 'the counter attack' and 'fatigue' and 'Spalletti flashbacks'.

Borriello a little hurt. Do I still get credit for the Taddei tactical sub if/when it happens?

Roma Clusterfuck showing.......Mirko off the post on an audacious van Basten-esque attempt. Stadium-wide pants check on that one.

48' Haven't pegged the tactics yet, but upon brief glance it appeared 4-2-1-3. Someone for Taddei - Borriello or Francesco - before too long seems logical.

47' Corner Roma. Juan heads it over the bar. I imagine he's been practicing that a lot for use down the other end.

I'm okay with this.

46' Simone Perrotta may break the Serie A record for meters covered in a game during this half alone. Good start too.

Menez on. Also didn't see that coming. Not for Mirko, which means we may avoid someone's death. Also not for Francesco. Borriello....no sir. Simplico.

HEY, ROMA COASTED THROUGH THE FIRST HALF WITH A SOLID DEFENSE ON THEIR WAY TO A NIL-NIL HALFTIME SCORE.

44' Yellow for Marco Zambelli, who you may remember signed for Roma a couple years back.

43' I wish they had Adriano available so he could headbutt defenders off that 5-man defensive line like it's Whac-A-Mole.

42' Cesena v Catania has two goals now. I reserve my right to complain until the second half is over.

41' Nice of them to dig Zebina from the grave for this one. He's aged worse than a Russian woman after 30.

DON'T MESS WITH THE PLAN.

39' As directional heading goes, I rate this team as:

37' I not only threaten, but I promise that should they go into the half 0-0 and then blow the doors off in the second half, I'm showing up for the next liveblog after the break.

35' Borriello heads it well over the bar. See below.

34' Several hundred chances in front of net, but they fluff every chance as to score before the half would disrupt the plan.

Borriello tug in the box.

Right now, however, I'd be considering a run to the store for the lettuce I forgot earlier were it not for this liveblog.

So live with that as my salad feels very unsalady this evening.

26' Brescia finish a counter in which they've pulled Juan and Philou by shooting weakly from 30 yards.

24' I love this new first half Roma. Maybe I should do my taxes or paint the living room til the break.

22' Brescia defying all logic with nary a Borriello shirt hold in the box as of yet. Team record?

18' Offside Brescia. Don't imagine we'll see much of that today.

Brescia's lineup is rather frustrating to watch, and I'm not even on the pitch. Morphing from 3-5 to 5-3 makes me want to punch puppies.

Actually, I'm not sure what they're doing right now. Looks like an U6 scrum type formation. Wholly effective, though - proof that sometimes the best way to beat a good pro over short stretches is to play like a bad amateur.

16' Does anyone get the feeling Mirko thinks he's faster than he really is? I do.

15' Spalletti would've had about 42 shots off Arcari's hands by now, with a Julio Sergio miracle on the other end. Same score, though.

13' Do you suppose Perrotta gets jealous when Simplicio gets to play CF for a minute, as now? I do.

10' In fairness to referees, Borriello makes it seem as though he handles the ball whether he touches it with his hand or thigh. Arms wide, not tucked.

9' Brescia's moving the ball around like someone who's about to lose possession.

8' Mexes nudges Eder off the ball, who then nudges it out of bounds. I thought we were nudging up to 'Roma concedes weak sauce opening goal in the first half' again.

7' Borriello's hair is getting worse by the game. This man may win capocannoniere.

6' Francesco's even in shortsleeves. Did not see that coming.

Francesco's shot blocked with a few defenders in his way. Saw that coming.

4' Must be warm in the capital this evening, as we look to be snoodless. Save for Diamanti, who's probably just using it for the red lips tattoo he just smartly planted on his neck.

3' Slowing down into a nice, nap-like pace. This is more like it.

1' Uh oh, here they come looking fluid and one-touch-passy out of the starting gates. I want something formerly lunch from the off, or this could be a long evening.

Stream of choice at the moment.

Splicing right into the pregame shakes (of the hand variety).

Well hello there again, turning point A for the season. (A was Brescia, then Inter as B, Lazio as C and Milan as D?). How much we hated thee.

So this is Revenge Mission IV, I take it? I & II went fairly well, while III is TBD.

Important news: atdhe.net is dead, but has been resurrected as atdhe.me for your streaming pleasures. Of course there's also my favorite, MyP2P, still running strong and lawyer heavy.

Right now I'm pondering things to discuss whilst Roma sucks aesthetic arse during the first half, and I'm thinking Roma's outerwear models (Totti, Perrotta, Borriello and Cassetti should be good for 3 snoods, 2 leg warmers, 2 pairs of gloves and one mystery garment we can't see between them) and Mexes' hair, while I've also got 'my stream is shit' loaded in the chamber.

This is what this club has done to me. Next thing you know I'll only be buying my groceries when they're available on a free transfer in July.

An enormous pet peeve of mine is when fans whine that their team isn't on television in another country, particularly when it's a big team which gets enough pub as it is (exclusions for obvious big games). However, ESPN3 has decided to show Cesena v Catania today. Who the flipping fuck wants to watch that? Basics, people.

And as expected, streaming is truly dire today. Fancy that. Not like this game's in Rome, at the Olimpico or anything.

(Simone's extra 'r' is for extra running. I haven't the slightest why it's taken me this long to work that in.)

The official. The internets are whispering siren songs of a tridente, but could we be in store for an utterly bombastic 4-2-3-1 with a treq line of Mirko, Simone, Borriello? One can dream.

I was planning on expounding the treasures of Simone at treq and its recent impact on the side (once again), but since we're about 15-20 minutes away from the official lineup, I'll hold off ever so briefly.