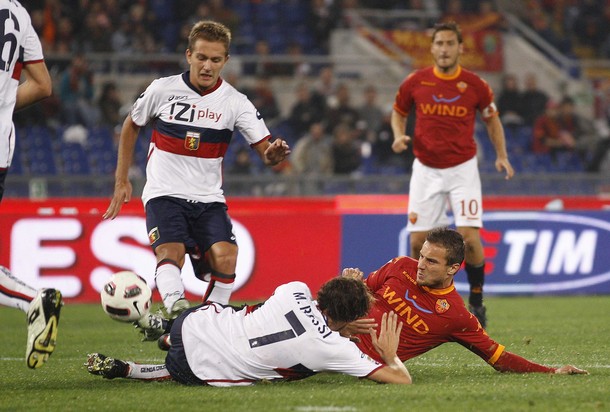 I'd been puttering around the last two days under the misconception that tomorrow's game was merely Parma.

Oh, how I wish it was Parma.

Things never seem to go well at the Marassi with the non-ringed ones. At the Olimpico we could pencil in a commanding victory, but not by the lighthouse. Even when Christian Panucci bulleted his trademark far post header for a win in their top-flight return (while wearing the armband, of all things), my overwhelming memory from that game was the aesthetic disgrace that was David Pizarro at trequartista. Like Kate Winslet doing adult cinema - great actress, wrong genre.

This may not end well. It's not starting particularly well either, though I'm starting to believe that injuries are a friend not an enemy, and that Mirko dismissing the calcio equivalent of Sophie's choice for a week is nothing but heaven-sent.

So the good news is that one of Roma's best players is injured, and that karma should have two in the chamber awaiting retrieval during office hours.

Pretty much everything else. And the good news is pretty much bad news too. That about sums up where Roma's at right now.

(That's not entirely true. They haven't played horrendous football at any stretch during the current four game stretch of Armageddon, it just feels that way and we'll run with it, since everyone else seems to be.)