Share All sharing options for: Project Vincenzo Montella/Countdown To Carletto: Act I 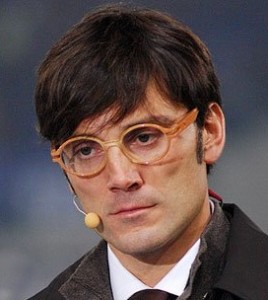 Montella wants to smile, trying not to, then gives a hug. I give myself about 3 weeks until 'Carlo who?'

93' Terrible ball into the Bologna box goes wide then is hoofed back to the other end as we settle in for 1' plus of Roman Clusterfuck in their own box.

92' Pizarro tumbles as he's clipped from across;

Montella tying his shoes as I wonder for one brief moment...'Do they have any subs left?'

89' Feels like they're playing/seeing/reading angles better than in recent times today.\

Riise with a clash of heads, headache forthcoming.

88' Esposito facepalms Francesco, which is, in fact, a foul....sensational movement from Menez and Brighi foiled, and Brighi tries to grab the rebound with an overhead pass to no one.

85' Looking solid in the closing stages here, but we've seen that before.

83' Either Bologna hasn't made a single move down the left side - rather central, obviously - or I've simply missed hearing Cassetti's name at all today.

Menez on, Mirko off.

Paponi charges into the back of Mexes with his 1786 hair, then tells Mexes to get up. Not a bright boy, that one.

80' Mexes yellow for either a shoulder foul, pounding the ground or yelling at the ref, possibly all three.

77' AS Roma running the five man stack on the left side. I have no idea, but I like.

75' Bologna doing a bit better at disrupting the pattern of possession, and Brighi about to come on - possibly/likely for David, who's playing his first game since 1997. I think.