A Wolf In Wolf's Clothing

Share All sharing options for: A Wolf In Wolf's Clothing 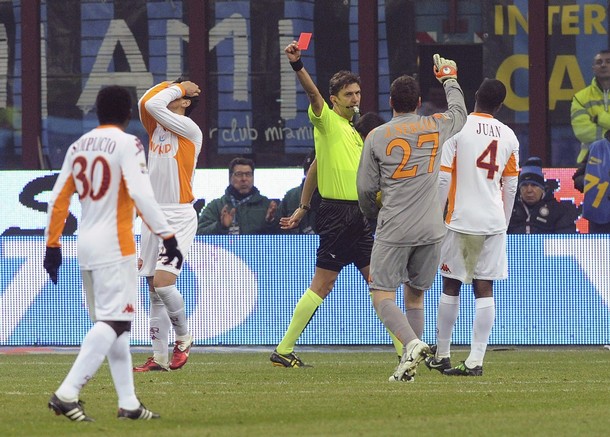 I did everything right. The same pregame meal, the same coffee, the same seat on the couch, the same damn lucky boxers. Everything which could possibly have been prepared so right was felled by a force so powerful no counterbalance exists: the law of averages.

Lightning wasn't likely to strike twice, and it hasn't. Nicholas Burdisso 'won' his third red card of the season (he tends to get his money worth, and a last-man pull from behind is surely that, so he gets to 'win' them, while most simply have them awarded). This not only leads Serie A, but it also leads elite Europe - no one in the top seven leagues of Europe has acquired three red cards thus far this year but our fair Nicolas. I would think he might be the only player to win three straight reds over the course of the entire European campaign, and we're one week into February. It'd be extraordinary were it not for the name on the back of the shirt. Those eight letters simply mean it's par for the course; a regression to the mean.

To put this in further context, if we're to revoke his red for one of the greatest tackles in recent calcio history back in September (and we should), popular posterboy for card-collecting Philippe Mexes has three league red cards since 2005-06. (Juan has two since 2002-03 - one with Roma - for the record.) Innocent in the weekend's happenings no, but Philou's errors come outside the white while Burdisso's come inside the lines.

This isn't "Oh dear, he needs a talking to." This is who Nicholas Burdisso is. He's a seemingly nice guy, good - not great - defender, exceptional teammate and extraordinary leader, but a tremendous liability. Not so much the color of the cards but rather his penchant for doing unthinkably stupid shit - proper scientific term - at the most inopportune moments.

I can't believe how much I've come to like Nicolas Burdisso, to be honest. When Roma bought Nicolas Burdisso, I was incensed; not angry, not upset, but incensed. After all, I'd...watched Serie A. Yet there was his 2009-10, something most had conceded the outlier, an extraordinary exception to the rule, but that didn't stop him from being any less a key cog in the side. The summer was cautiously optimistic, hoping the leaf had been turned but knowing that the cosmos was likely to invoke their laws and that 2010-11 Nicolas Burdisso would look nothing like Nicolas, loanee. A predictable universe.

I don't like definitives, but Roma can't go on with Nicolas Burdisso as its second or third center back. Sorry, they're just not good or deep enough in the key positions yet (those being the fullbacks and DM/CB3's not named Daniele De Rossi). Fourth, and leader off the pitch? I'd love nothing more. Great, great guy. In fact I'd love nothing more than to see Nicolas Burdisso in a Roma shirt, they just can't afford to have him anywhere near the pitch. Pazzini - or Eto'o - was going to score regardless, but the climb would've been far more likely with eleven rather than ten.

These 'episodes' are decisive. They're the battles that turn the war. And while it wasn't the only battle which lost the war, it was the crippling blow. Insert more cliches here. Out.

I have no gripes with anything he did tactically. That was genuinely the best I've seen Inter in a very, very long time, and they're a very, very expensive team. Big pay packets playing that well together...what can you do but go back the other way? And they did. It's not as though he could've stumped up for a world class left back during the half so that John Arne Riise wears shorts sleeves could stop being abused, or gone to hell to find Julio Cesar's soul.

However he, like Mexes, isn't entirely off the hook. This isn't an indictment on Ranieri as much as it is on sport as a whole: situational coaching - where is it?

Man going to net - particularly when it reads Pazzini across the back, as Nico could plainly see - with an exceptional reflex keeper between the sticks? Ride your chances. Or on a larger scale, be prepared for any single situation which one may come across so that it's a reflex, rather than action.

This wouldn't be so much a concern had it not happened less than one month ago in Genoa. Situational coaching is a dying art. Maybe the Americans can send in a Marine. Or a Boy Scout.

Whichever is 'always prepared', because it sure as hell ain't Roma's defense.

Give that man a hug.

And that is all, really. I had a snap reaction, snap post, head snapping off the desk when Nicolas reached his arms out from just behind Pazzini, but I waited, slept on it, then napped on it, just to be sure.

Nothing changed and this is it, largely because it's been a simmering on the back burner since September. They showed tremendous heart in those moments after Burdisso's moment, but it never should have been required. Roma's an excellent team, but it can't play both itself and the opposition simultaneously.

That said, they lost down to 10 men at the Olimpico, and still made it a game in the final moments. Nothing to scoff at, they split the Serie A season with Inter. Home and home. Again, nothing to scoff at.

No, but the thought of Loria in central defense on Saturday against Napoli is worthy of your scoff. And tears. And liquor. And anti-depressants. And tidying up the old will.

And apropos of that, the law of averages will take fruit baskets for the Loria goal as well. The karma was teeming over.