Share All sharing options for: A Cautionary Tale of Love, Lazio & Lament

This was written some two months ago, during the winter transfer window, yet never saw the light of day. For some odd reason, it seems apropos today.

Throughout my time here a number of Roman youth products have gone, the grand majority without a whisper on these pages; pages which normally only require a kind smile for full exposure. Claudio della Penna is one, and he's gone to Ternana, lost in the unforgiving shuffle between promising prospect and proper footballer. He's only 21, and though I haven't seen him play for roughly two years, perhaps because he doesn't get off the Serie B bench, the early signs read clear: he's destined for a journeyman's career. It's certainly not a bad way to earn a living, most would give a leg if they could get away with it, but this is not the dream. Claudio della Penna, despite the hype, even if slightly tepid, is not that dream.

And that's sort of the point: when they leave, they're gone. I don't pay attention, even if it's on loan, because I know in 99% of cases, that's it. Roma's system is massive and it will churn out prospect after prospect, one of whom will live the life of the luckiest bastard on earth and become...Alessio Cerci or Aleandro Rosi. This is true for Milan, Juve, Inter, etc. - the only difference is the partially developed prospects they buy. Francesco Totti, Daniele De Rossi...they're the pipe dreams, the outliers. They're so exceedingly rare mere contemplation is a waste of time.

So these prospects will leave and we will come to our annual realization that hype is just that, equal parts fantasy and salesmanship, lesser parts truth - much of it is contrived. And when they go, I won't pay attention. I never pay attention. Except for one.

His name's Fabrizio Grillo and at one point during the early parts of the decade, he was the most promising prospect in Rome, perhaps considered the greatest defensive talent in this defensively charged calcio peninsula. He was the new Nesta, and he played for Lazio.

And then Roma stole him.

Unless you picked up the Italian papers daily round the turn of the millennium or happened to catch my once-yearly name drop in these parts, you've probably never heard of him. His corner of the internet is now barren - he's still longing for an Italian wiki and the race for SEO glory has overtaken the once rich and promising lands of free information, not to mention his rise and ruckus came during before the era in which the internet was an all-consuming vortex. (Hi.)

But he was special, and he was a phenomenon. He was gushing hyperbole in the flesh. They all told us so, and mere weeks after that Lazio glory, he left for Roma. A third derby won because Lazio wouldn't give his kid brother a contract.

Why I remember him of all the overhyped phenoms to have trudged through Rome and calcio over the years, I'll never know. Maybe it's the nature of the move, the artisan-crafted dream scenario; maybe it's longing for the days before FM ratings, YouTube and scouting networks in which the imagination was given freedom to run wild; or maybe it's the Romanista's natural inclination to find the one closed road nestled amidst thirty others open and stand waiting for it to be unchained.

Grillo came to Rome, performing as promised. The hype was there and it appeared Roma had stolen the heart of Lazio. Now he was going to be Nesta, but a Roman Nesta; the cosmos had finally righted itself. And then came the story which is so crushingly prevalent, so cliched and overused during script-writing in the heavens I'm sure there's a template somewhere online I can simply plug in the nouns: the knee blew.

And at 23, he was good enough to earn his move to the top flight. Finally, with the better part of a decade gone since his star shone brightest and having shifted to left back, he'd landed on professional football's top stage - in Bulgaria. 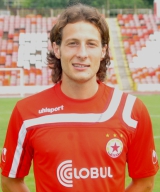 CSKA Sofia is Fabrizio Grillo's new home. A club which adopted a no foreigner policy last year whilst also succumbing to an Alessio Cerci brace with about 42 Brazilians in their lineup. For a young Italian, there is no road map to becoming the 'next Nesta' which includes a layover at CSKA Sofia. This isn't the design, it's the remnants, scrapping for a way.

But it's something more than being an afterthought in Serie C1. It's quite a bit more, actually, considering he'll be playing European football on an annual basis. That's really nothing to scoff at considering he was three divisions down not much more than one year ago. At 23, the future is not closed, and there's nothing to say he can't forge, at the very least, Damiano Ferronetti's career - one most in the room would give up that limb for. But he is not Nesta, will never be Nesta, and probably never was Nesta. The knee injury is just a convenient subplot to pinpoint in lamenting hindsight, wonder 'what if' and about which to pen the occasional blog post.

And while Grillo tries to forge that career, I'll watch. Why, I still don't know. I'll follow his next move, be it next summer or the one after that, just as I do every year. I've already checked CSKA's schedule, and am surely the only person outside of Bulgaria looking forward to their opening Europa League match. There was something so perfect about the narrative, so impossibly unthinkable in its construction - the Roman icon being snatched from his Lazio crib - that I just can't let it go, and likely never will. He was the dream.

This isn't really a cautionary tail, since only the most self-loathing masochists blow out loosely-linked limbs by their own choosing, it's more just a reminder: regardless of hype, nearly everyone to pass from the Roman youth system to the pages of Tuttomercatoweb today, or who's done so already this summer, will be another Fabrizio Grillo.

And I'm still left hoping Fabrizio Grillo will be the exception to that rule.