Stream of a Derby (I)

Share All sharing options for: Stream of a Derby (I) 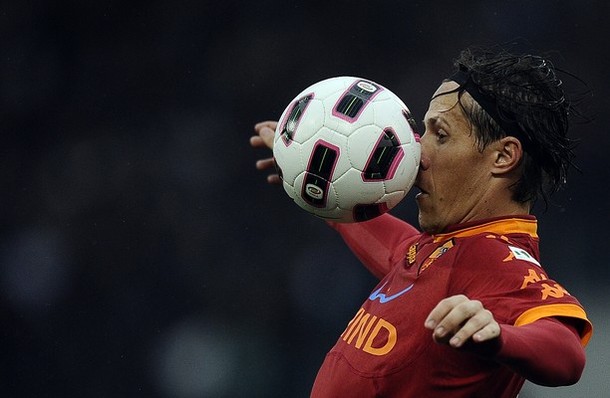 Cranky, in a word. How best to lift one's spirits? Why watch a replay of one of the best derbies in years, of course.

A live-ish format is much too formal, too structured, however, and I am not in that mood.

This could get ugly.

Stream of a Derby.

Stefan Radu looks like he may have been a nemesis to the Three Musketeers. Nicolas Burdisso has a small gerbil doing cartwheels about his rectum, clearly, judging by the look on his face. This is your derby, people. "Derby handshakes". Why lie to us? Why? How about the winner of the last derby gets to bitch slap each and every one of the opposition as they proceed down the line? Why aren't I running this sport? My stream just crapped out. And it's not even live. This reminds me of the time when I didn't have a clever anecdote, but I just wanted to open a sentence with "This reminds me of a time..." And we have kickoff. Lazio look like a bunch of sailors with shoulders ripped from their shirts in the locker room. I'll stay within the white lines and allow your collective imaginations to do the remaining work which would have this post removed by management's demand. (Big night on the port, fellas?) Something about Mirko Vucinic also makes me think of gerbils, but perhaps that's just his occasional fat face. Pretty sure Zarate's prevailing weakness in his game is that he's yet to realize Serie A is not a video game. Granted, it looks good for a few seconds, but ultimately, real life slams him in the face eventually. Belstaff...I like those coats. Warm cucumber Juan makes an early derby cameo. John Arne Riise makes a cameo as the furthest red shirt. David Pizarro makes a cameo as someone who can shoot from distance. Which, needs to be said, doesn't seem to happen enough. I realize that it's not their game, but the mere decoy or a failed shot does wonders to the mental process of the defense. And my child-like joy. Mirko Tomba meets Mirko Totti as he slaloms into a backheel, but let's ask the important question: how many ridiculous showgirls would Mirko Tomba-Totti return to his lair or a night's kip and extracurriculars? Is [imagine I had time to paste infinity squared here] too low? Like I said: the important questions. Mirko....I don't know. Who does barrel-rolls? Why can't it be more elegant, like a triple toe loop? What's the difference between a lutz and a toe loop? Is there a difference? Are they just fucking with me? I think they're fucking with me. Anyway, he barrel-rolled. Imagine someone who barrel-rolled and finish off the thoughtless process.

Breaking to reroute this tangent.

Hernanes' face offends me, and I'd say that even were he to play for Roma. There's no way a wispy molester mustache inspires anything but mistrust and general disgust. I wish that hadn't rhymed. Remember when Sculli was linked to Roma and Inter? Lazio. Ha. David Pizarro is causing me dyspepsias in the box. The next time I see a Cruijff turn in the Roman box, I'm going to jail. The man could anger Care Bears, and all they damn do is care. Lichtensteiner grabs several yards of Mirko's fabric from behind, carded, incredulous. Curious. Jeremy Menez runs, or rather doesn't run, like he's 40 pounds overweight, yet the boy bloats with a whiff of gelato. (Gelato sounds rather delicious at the moment, it must be said.) Mirko scissor tackle, Mirko best tackle of his life, Mirko yellow card, Mirko upset, Mirko gerbil face. The sequence of events could put a man into his grave of delight. I'm beginning to think Juan is secretly a spy; there is absolutely nothing in this vast world which can fluster than man's exterior, save for, perhaps, the prospect of hanging his keeper out to dry at the Marassi. (Grudges, etc.) Jeremy looks to have lost about 10lbs or so; that's something, but Doni still has a greater average speed over the course of the 90 minutes. And now he's waving to his throngs of fans, the stoners in the upper reaches who...is that Mirko?

Do you ever get the feeling Mirko Vucinic thinks he's faster than he really is? I do. Almost on a weekly basis now, which is why you hear it so damn often, and which is rather disturbing, as he's not only getting no faster, but his belief is growing ever stronger. (Gospel, etc.) If derby workrate made babies, Simone Perrotta would be Genghis Khan. And if derby wins made babies, Lazio would be adopting. Are there any undecided college students out there looking for a purpose in life? How about studying the effect of a five-win derby run on the swelling and flaccidating (not a word, nor do I care) of the Roman and Lazio fandoms in several years time. I mean...two years without a reason to live? There must be some serious non-passionate lovin' going on in the Lazio side of the rolling hills. Romans? Makin' love like bunny rabbits. More fans for Roma, fewer fans for Lazio. Of course we'll need a brave soul to study the human-goat crossbreed demographic.

There is no way in hell Lichtensteiner is not a) mentally deficient, and/or b) a serial killer.

Totti just played a pirouette off Ledesma onto a running Mirko. He clearly didn't mean to do that, but he clearly did. That's his genius. Menez down 20 pounds. What the fuck is his deal? Does he need a pregame fluffer to get into the mood right away? Whatever happened to Luca Toni's fluffer? Did John Arne Riise wears short sleeves earn that illustrious distinction? I wonder what Luca's doing right now. Probably sitting at home with Marta, eating gelato (officially obsessed), watching a movie which is funny, but no so funny as to parallel the heights of his bellowing laughter and ear celebration from the couch, pissing Marta off in the process as she wonders what life is like with the poor man's Luca Toni, Andrea Caracciolo. Poor, judging by their place in their table. I say that without knowing their place in the table. Flip, flip, flip....oh, right. As you were.

Back to this, the real fake replayed world, Matuzalem Bruce Lees Francesco for the first time this evening, as the announcer presciently tells us, "if there's going to be a breakthrough, it's going to be from a set piece." ESPN announcing. ESPN. I'm flabbergasted. And Radu still looks like he buckles some swash. And Montella is buckling his emotion. Or buttoning. Possibly both. Similar concepts, right?

Chilled cucumber Juan saved off the line which, let's be honest, is just yet another incident of Cristian Ledesma being bitched by Francesco Totti. Instead of scoring two of three, Totti gets two of two and every single bit of the scoreline. How does it feel to fail even when you don't? Like Lazio, I imagine. Like Lazio. You know it's been a good derby when you're watching the replay and it takes til the 42nd minute to notice Terzinoburdisso. (One word, said really, really fast.) Mirko Tomba meets Mirko Nada. Also now realizing Lazio's shirts amount to a wet t-shirt contes, which no one, particularly the fans, wins. How very Greek of them. (Fraternity, sorority...)

[To resume when my computer stops acting like a goat]