Stream of a Derby (II)

Share All sharing options for: Stream of a Derby (II) 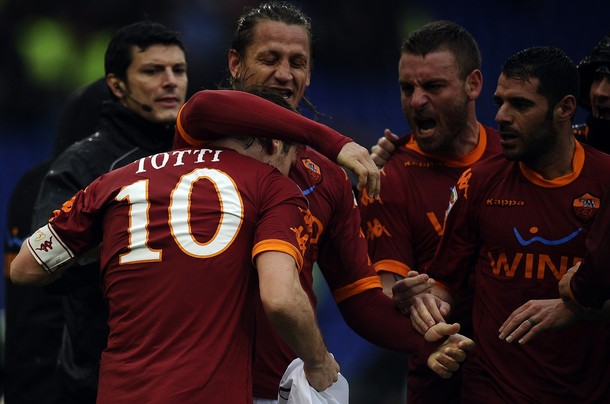 I may or may not have fallen asleep halfway through the second half. Like Lazio's attack.

Stream of a Derby II

[Fastforwarding to the hour mark]

Floccari's hair is completed ill-suited to his head. Radu's Rogaine-rider isn't. These are important discussions. Ledesma is complaining about something, probably not being given the opportunity to finish his fluffing near the center circle in the 57th. How rude. Honestly. He could pen a small...picture book in the time it's taking to complete this free kick. (Are free kicks really 'free'? Not really, as they're either won by an injury suffered - not free - or a slight loss of dignity in the event of a Pavel Nedved.) Rodrigo Taddei doing the YMCA. Well, the Y. Missing the MCA. I feel like this is metaphor: a straight line splitting into the gaps, with the big picture "Why?" He's also looked like a lunchlady for several years. These are things about which professional athletes with both disposable time and income should be supremely concerned.

Has anyone ever noticed Muslera uses the number 86? Is that his birth year? What the fuck is this, a Gmail account? Get it together. Also, a green laser may or may not make an appearance in the coming minutes, which is to blame for the lack of Stick 'Em on his hands, obviously.

Claudio Lotito looks as though he was just hit with some green laser all over his face; how utterly glorious. Also: do you suppose he requested the sailor boy uniforms? How many times have we seen Muslera look the fool against Roma in the derby? And this from the one player who actually put in a modicum of effort during Intergate 4,712 last spring. Closet Roma fan? If so, he's not quite vociferous about his hurt feelings, unlike spurned Romanista Stefan Radu. He's my favorite of all the spurned Roma fans, if only because he's so fucking transparent.

Matuzalem stomps on Totti's face, Ilary looks very concerned, as....oh, right - paycheck's still comin'. Mauri and his A- Cup coming on. How delightful. Fabio Simplicio and his D-cup beer belly also looking to come on. Dear lord do I love that man. He's like Adriano with half the talent, twice the productivity and a tiny little gnome inside his brain which tells him when it's time to stop drinking.

Doni puts me into a conniption and suddenly, we're thrust back to 2007 - coincidentally, the average BPM of Roma fans when he's within 4 yards of a football and/or the edge of the box. He seems like the clubbing type, too - though brontosauri more than anything which might involve Tiesto (umlaut at your delight), glow sticks and disturbingly available volumes of rohypnol.

Totti time-wasting show. We're a Julio Baptista away from finishing off the game in the 86th here. Radu headbutts Simplicio because deep down, he hates playing for Lazio.

Derby desroyeur Fabio Simplicio and his D-cup gut wins a penalty. Ledesma wins a red card. I win a lot.

The game is over. I don't really care if they play it for another forty minutes. The game is effectively over. Just like Lazio's chances of respectability in the near future.