And despite all that flotsam and jetsam - sweet wing set (really?) - the eyes will simply not remove from the central back position.

(Do not this is all speculation via RomaNews - but they've got their finger on the pulse.)

- It appears that Simone Loria will be given the starting nod on Saturday against Palermo. This conjures up night terrors for several reasons irrespective of the opponent, but also because the last time Roma played Palermo, they were blitzkrieged through the center for 90-odd minutes.

Might be worth seeing what Christian Panucci and his Vespa are doing this weekend. This has the potential to end horribly, particularly with Roma at home and likely to command some degree of possession.

Updated wills and cyanide at the ready.

- Did not bother to specify goals scored/conceded when Loria was on the pitch, so let's just chalk these overall stats during his Roma tenure to bad jujus.

And you didn't think it could be any worse than the horrifying, nightmare-inducing, bed-wetting flashbacks.

Silver lining, however: Impressively rare that something which has looked that bad in reality can somehow reflect even worse on paper.

- The chances Burdisso lands red card number four seem to have increased exponentially, if only because central defense is a black hole right now.

- This bouncy jaunt into our dear Roma has really taken a turn for the suicidal. 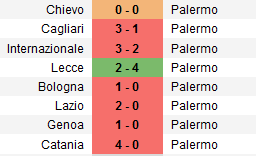 One might say that's the Simone Loria of away forms.