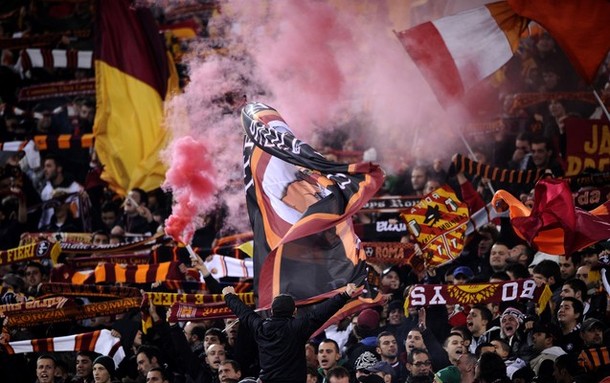 While we sit in silence, staring off into the starry night at this fresh new world about to dawn before us, an evening of original experiences and battles never before fought (you know, Roma v Inter in the Coppa)...

Can I ask a question?

What the fuck is the point of having domestic cup legs three weeks apart? Is this really necessary? Throw it back-to-back like it's a baseball doubleheader and call it an evening. Or early morning. Whatever. Get it done snappishly, as there's no need whatsoever to drag it over the course of several weeks.

(I don't care about your prospective Champions League schedule or logic or facts or anything which gets in the way of my annoyances.)

The problem for this leg is that I expect the Roma of May 11th to hold one of two identifying characteristics:

i. Dead
ii. Very much undead.

Leaning towards the former, but as we all know with bipolar Roma, they're apt to hit a patch of complete mania and then...well, that's when things like 2009-10 happen.

Right now, they are not at that point and very much venturing to the land of the great unknown, more commonly known as hell aka the Europa League (maybe).

In reality, this team is Udinese understanding the offside rule away from being 1-2-3 in their last six, with that "1" being a derby, so it counts - twice (5 x 2 = 10) - but not when it comes to form and quality and all that crap which matters outside the purview of those entirely unique ninety minutes. And furthermore, they're 1-2-4 at home in their last seven, with that "1", again, the derby. How utterly awful.

So yes, this game matters, but a little less than half-matters, as May 11th...who knows. Good starts are nice, but as ever with Roma...no one really knows. A good start seemingly unlikely as yes, Roma sucks at the moment ('sucks' is childish but all too encompassing to use anything else). But now they get to play Inter, an entity which...also sucks right now. A rather legit 1-0-4 in their last five. Tasty form matchup, isn't it?

And both are also driven by foreigners now.

I hope Francesco spends the evening on a plane to Manchester to stick another boot up Balotelli's arse. Bet Moratti would jump for the ticket.