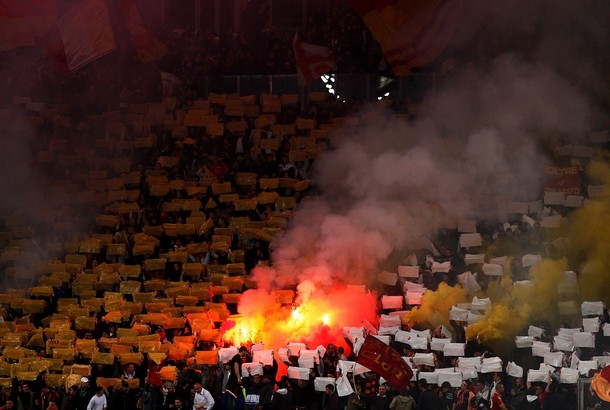 Waiting for this, have you? Sorry to disappoint.

In case you hadn't noticed (by now, you should've) football is two separate entities to me:

Football as a business.

I'll give you two guesses as to which one I give a flying feck about.

I don't like money in sport for reasons I probably cannot explain, which should suffice as explanation enough. I find it utterly absurd to throw hundreds of millions of [insert currency of choice here] at a game, cliched and trite though it may be. Then consider the fact that someone thinks they can make a buck, euro, rupee based on my emotional ties to a ball being thwacked to and fro, to and fro and it gets a bit under my skin. As things in life which deserve this sort of 'value', sport should be on the very, very bottom rung.

Sport is sport. To some, it may be a business. To me, it's a game - always a game. (Game/exercise in shortening one's life.)

But I do separate these entities. During the season I will entertain transfer rumors, thoughts of what n euros via the Champions League, Europa League or No League means to the future of the club, but really? I just don't care. I like the games and I like the ninety minutes of utter chaos that shakes up the obscene tranquility that is the remainder of my week, that is me. Week in, week out. That's all.

Summer - that's the time for football the business.

This schism stands more prominently today than ever, as I just do not see AS Roma as a continuous, fluid entity. Just don't. The club is football, and football is season to season, fall to spring. Right now, AS Roma is not AS Roma, but rather AS Roma 2010-11. On the evening of May 22nd, it will simply become AS Roma again.

Simply put? I care too much about the football to care about anything else, as that's all this is to me - a sport.

Ownership transitioned, but I don't see it like that - I see it as ownership will transition on May 23rd. Not a cop out, not a lie, not avoiding anything. That which happens in the board room impacts the team, obviously, but not Roma as currently constituted - not Roma 2010-11.

I used to go through the motions. I think it's rather obvious I don't, won't do that anymore - I simply don't have the time. Obviously I'm not happy about it, as I've seen what happens when Americans, particularly the American of note, take over sporting organizations. And if 'globalization and modernity' is your bag, that's fine - it's not mine. I live those things every single day, which is why I escape to a dollop of tradition and romanticism in my football, hence Roma. Foreigners outspending the lot, "branding" to kingdom come for titles is not romanticism - it's cheap and easy, like everyone Borriello dates.

But I will be unhappy on May 23rd, and you will get a heaping handful of that unhappiness. Right now, however, happiness to me is ninety minutes of barnstorming passion every week, to and fro, to and fro.

At least once they get their shit together.