What Is This...Football? (Juventus Edition)

Share All sharing options for: What Is This...Football? (Juventus Edition) 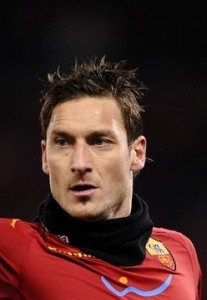 91' Goal kick Juve. Should have been a corner, but they were sparing the fans.

90' Corner Roma. Nothing will come of it. Obviously. (Confirmed.)

87' This is rather annoying. Waiting, knowing...

DDR with a horrible sitter miss when Totti called offside, though he wasn't.

84' aRiise with a decent ball...into the 47 striped shirts in the box. This is predictable.

78' There's not much going on right now save for looking out the window, wondering how the same thing can happen to the same team, time and time again, without proper explanation.

73' Now Krasic in, Doni saves, and were his shins not made of steel, would've landed at Matri's feet, open goal.

70' As time passes, Felipe Melo looks more and more like the Brazilian Simone Pepe. What the hell is happening there?

Borriello getting ready to come on.

69' DDR howitzer turns into a cap gun. And wide.

This is not shaping up well at the moment. Juventus are finding the holes and Roma is allowing them.

Cassetti knocks over the adboards. Not quite as fun this time.

64' Juventus with goal two saved by Doni about 15 yards from the goal mouth. That was disaster averted.

And there's a corner with 47 jailbird shirts in the box, 4 red ones. Yeah, this should go well. (Doesn't.)

63' See, Menez seems lazy, but you think he's somewhere on the right, loafing, and then all of a sudden, he's on the left, not.

And then he's called out for a dive. Who knows.

61' An injection of life seems necessary at this point. Defensive spacing is less than ideal, to say the least, while running forward is staggered.

55' As Juve work more and more possession and Roma slump further and further back into midfield, you wonder when the next change is going to come. They aren't quite on the back foot, but it's a far cry from the first half.

Perhaps this is "frustrated Roma" from the 4-2-3-1 era of yore? Certain parallels...

53' A more back-and-forth flow since late second half...Menez at pace, which is fun to watch, but Mirko floats it too far wide to Francesco, who's taking more and more space out right.

50' Mexes is not long for this game. In fact, there he goes. Cassetti on; a more traditional back.

49' The pace has deadened completely with the undoubted underlying plot to lull Storari into a nap.

And Nicolas Burdisso to...no one.

47' Menez is also asking Burdisso for precision passing. That's like asking a blind man to describe a rainbow.

Storari is killing Roma. Again. That is all.

Mexes may be hurt on his patented cornerkick routine as he fell down unchallenged, going back the other way, Matri was stopped after a poor pass.

45' DDR hammer. Storari incredible save. Fucking hate him. That was a goal, easy.

41' Krasic has Matri fed in, instead feeds Terzinoburdisso.

40' Sneaky steal by Perrotta to launch the counter, Mirko goes wide after Menez learns his passing sucks for the umpteenth time today.

39' Either someone is going to score a goal, or this thing's going to the half scoreless.

Pretty sure about this.

38' Doni looks like he's auditioning for a part in some low-budget gangster film with that facial fluff.

34' Grosso both heads the ball, from the far post, high on a mostly free header, and also has a tan which makes me think he holidayed on Mercury.

33' Would somebody please fucking explain to me what's going on with Juve's collars? Are they supposed to be halfway up and black on a black stripe, or did they just run out of material and/or capable designers?

32' Pizarro yellow for being vocal, possible name-calling, being Chilean.

Roma run....oh my lord. Storari saved a goal but the ball was trickling back and then cleared off the line. Unreal.

26'Juve is largely camped, but not of their own choosing. Roma is just...better right now.

23' Mexes rumblin, ramblin....Menez, with a weak sauce cross. He's not been brilliant.

18' Perrotta finds the spot. So that.

Riise unleashes a WMD after the whistle. Totally worth the yellow card had there been one. (Wasn't.)

17' Everyone else has been so busy rumbling into the box, I'm not sure Perrotta has even had a whiff of the penalty spot.

Mexes and Juan have both obliterated Krasic and his immediate family within the last 40-50 seconds.

14' Terzinoburdisso foray into the box. This game is absolute insanity right now, as Menez feeds the Juve counter.

Thankfully, Krasic has no idea what to do with either himself or the ball, so coughs it up out of pure beflusterment.

Two weeks off? Who said?

12' Brilliant ball to Francesco by DDR, unable to control it 1v1 with Storari. They are penetrating Juve's back with relative ease right now. Bad jujus? First 15 minutes.

10. So. As I was saying. Continually pressing/caving the center of the pitch with the defensive duo of Tweedledum and Tweedledee as Juve's fullbacks.

9' Continually pressing/caving into the center of the pitch with the....holy Mirko. Insane run into the box, parried just outside the bar. He just annihilated Bonucci.

7' Very, very fluid play and pace so far on both sides. Sense of urgency, one might say.

6' Menez with a stupidly good ball to Perrotta but for the timing (defender) and placement.

Well, it was a good idea.

5' Burdisso has bright neon boots. This may constitute the most inappropriate player-to-boot color in Serie A.

2' Corner cleared by a leaping...Menez? He can do that?

Corner Juve. Very non-Serie A pace to open this match.

t-1 (maybe): Teams on the pitch, Mirko's mascot just wandered and had to be pulled back in. I feel like this is symmetry.

All the mascots in the Juve shirts are causing problems. Obviously.

t-2: Odds on Alberto lashing a free kick which befuddles Doni and lands in the net? High, for some reason.

t-5: Just noticing how utterly weak Juve's fullbacks are defensively. Hence Yeremy? Possibly. Oh, Marco Motta, how we do not miss your defending.

t-7: Commercials. More meh. Can we just have some football please?

t-16: Meh. I would just like to see a ball kicked at this point. Such an uneventful two weeks, ya know?

Returning from the international break is somewhat akin to a night on the town with an unexpectedly strong adult beverage:

Stumbling into work late, disheveled, entirely unprepared, you're missing massive chunks of time, the last thing you remember simply cannot be that far back (Fiorentina? Two hundred & Totti? Really?) and you're pretty sure nothing good came of it.

That's where I am right now. What is this football bullshit?

The last I recall of Fiorentina was this: a significant improvement in play throughout the game, entering into the second half, while venturing forward in kind.

That, however, was away. But is home to Juventus really just away? Perhaps. Take note.

Waltzing through to make sure Fiorentina is actually the last game - serious, I had to - I found an interesting number of statistics. Games played:

What does this say? I'd say it's an indication of a season which hasn't gone exactly as planned.

Which it hasn't. At all.

Also, excellent news - Bertolacci scored a brace against an impotent Udinese today. Foxy in the box. So there's that.