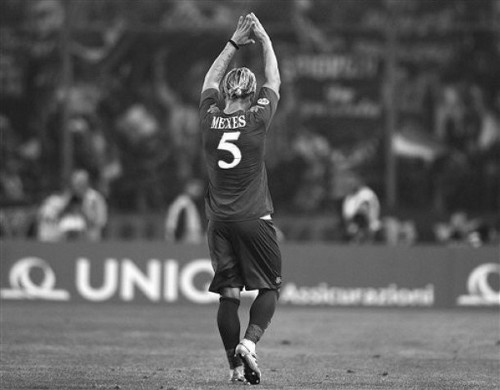 And so the day has come. A day riddled with sadness and fond feelings. This is a breakup of 7 years, of passion, of love and ultimately, of family. A boy not of Rome, but ever the Roman.

It's tough sometimes to remember that this is a job, a means to a means, and that in the end, though feelings may be strong, this is just laundry. These are men and boys who are fortunate enough to make a living at a child's game, kicking a ball about a patch of grass for hundreds of thousands, some millions; when boiled down to its simplest construct, that is really all. They have lives which are far more important than which color outfit they wear to work, as do we all - families, hardships and dreams far beyond the football pitch which never surface.

We rarely know, nor should we.

One of Philippe Mexes' hardships surfaced when his car was stolen, unbeknownst to the robbers that his daughter was in the back seat. A trying ordeal to say the least, even a man's worst nightmare. Another, when his house was burgled, his family inside asleep if recalled correctly, he missing a game in the aftermath of yet another frightful experience.

Would you want to leave that city? Would you choose to find another job elsewhere? Would you begin to fear for that which you hold dearest? I would too.

This is mere conjecture, a hypothesis, but would anyone blame Philou for leaving on the back of these incidents? Hardly - I'd help pack his bags, forward his mail and hire the movers.

And maybe it's not those things; perhaps it's something else. As he is one of Rome's most loyal servants over the years, there is no animosity towards his move, only sorrow, but he needn't be loyal or any servant at all. They're human and this is just a job. His having a reason is good enough, difficult though it may be for Roma to lose one of its pillars, its bastions.

But what makes this more difficult is that Philippe seemed just a bit more human, as his heart was never far from his sleeve, and his heart, his identity was always Roman.

His final act in Rome, in the city itself, was to push himself beyond reason, beyond crippling injury, if only for five minutes, for the good of the club he loves.

There could be no more fitting exit and today, we understand his tears.