Share All sharing options for: Let's Talk About Failure 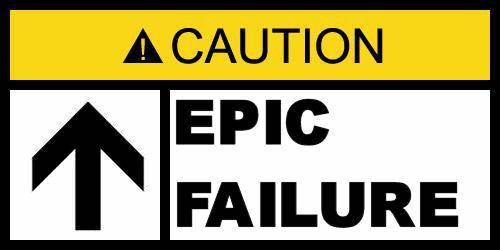 Few things have gone well this season. Few things, if anything, outside of one Francesco Totti, particularly given the lofty standards entering into this season.

One good thing happened yesterday. On the plane, attempting to log into WiFi to watch the beloved, there was a technical snafu and it did not work. I was kept from my first domestic Roma fixture in quite, quite some time. I was, in a word, pissed.

A blessing. Something cares about me, apparently; it does not care about Roma.

Hugs were indeed necessary. I have not watched the game, nor I have decided whether or not I will put myself through such torture knowing full well the inevitable and crushing outcome: late, dramatic failure. If it's worth watching, do let me know; if it wasn't, thoughts of fruit baskets for the poor souls unfortunate enough not to have been close enough to the heavens for a grand power to interject in Roman misery for a day.

The rest, however, is failure. It's quite clear that while Ranieri could not stop the bleeding, he was not the source. No one expected Montella to work miracles and he didn't - the short term boost is common, and there are studies on this I believe, after a coaching change - but Claudo is at least vindicated, as is Montella's future potential in the game. He is not ready, but the fact this team suffers an extraordinary mental lapse on a regular basis - the indiscipline is extraordinary - does not mean he won't be. Sixth, after last year, after the changes made, after the summer promise, after everything is nothing short of complete and utter failure.

I think perhaps too much changed with Borriello. Another face, another request for time, another system, a radical change in style of play at the top. He was perhaps seen as a missing piece, but he became too central to the team and thus, perhaps, the all-consuming piece. Borriello scored in the beginning, but the attack never really got going until Francesco got into Totti Mode (it's like God Mode, but better). People were unhappy. The defense was suddenly terrible. And it crumbled slowly over the course of the season. It wasn't just one thing, but...several signs point in that direction. Plus his hair is terrible, and we can both hold that against him and use to justify him as the scapegoat. Because we can.
a
It's a theory, merely a theory, but when something that massive changes, and changed, it's the easy answer. It seemingly rarely is with Roma, but as a wise man once said, "If you see smoke, and suddenly there lies a heaping pile of ashes...there was probably a fire."

I don't know. The beauty is we have 90 minutes plus a summer to ponder what went wrong as they hire the world's best demo man, surely, to turn the key and make the whole thing kaboom, before handing it over to one of the peninsula's best architects, Walter, who, one would hope, starts his summer shopping at lithium.

In other words, the summer may be equally as dramatic as the absurdly dramatic season.