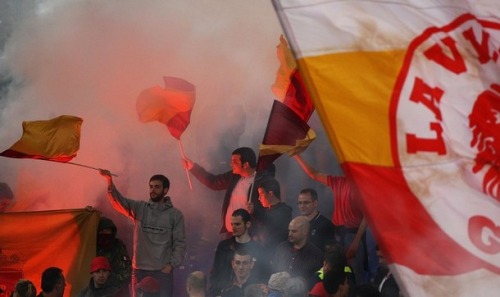 Amid the most bitter of the sweet, the final Roma game of the season, the internets were a-rumblin'. News had come yonder London of a move. A move which was of no direct relation to the season at hand, but soon took on a life of its own, if only in my head. News that Chelsea FC had sacked their coach.

Before last year's final match, I wrote something true. There were feelings and passion, inspired by a shirt. I expected there to be the same this time around. There were none. Just a game. Perhaps it was the realization of a lost season, of failure, and of the at-hand not longer being that, but peering into an unknown horizon.

That which was occurring outside the white lines took equal stage, perhaps even priority, as delectable visions of Carletto danced in my head.

Is he the best man for the job? Perhaps. Is it smart to put emotion before practicality and pragmatism? Perhaps not. Is this decision to be made with the head or the heart? Well, there is only one choice...

This season has been devoid of magic. There were moments, sure, but there was finally palpable expectation, and they failed. Not hope, but expectation. We could deal with the loss of hope, because hope is transient - it's not supposed to be, but might. Hope is simply oft not rooted in reality, and not in the majority.

Yet finally, during a year when it seemed all were going through the motions, primarily some on the pitch, and emotion had been ripped but for one man, we were left, on the final day of a disappointing season with a final, redeeming gift with which to set off into the summer:

The chance at a chance for the storybook ending.

She never lets us down.