There Are No Words (But There Are Words)

Share All sharing options for: There Are No Words (But There Are Words) 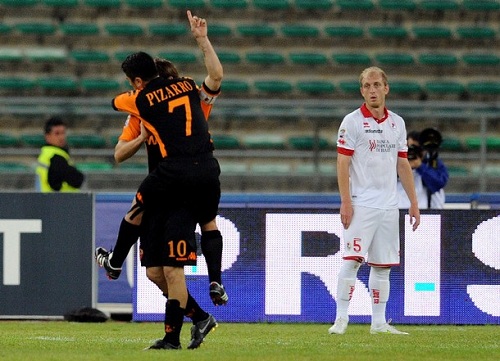 If you hold the power within to aptly describe, summarize or explain the maniacal enigma that is AS Roma, do me a favor...

Keep it to yourself.

Some time ago, I endeavored – stupidly – to blaze something of a trail in which AS Roma could be discussed, possibly ridiculed (by yours truly), in a forum of words of a specific language which, at the time, did not really exist in this, the www.

What a stupid idea, to encircle this concept around a club which so often defies words.

Sunday, once again, they defied words, explanation, reason or even a dollop of good sense.

Roma was everything we expected: Bari's equal. Possibly worse on scales of relativity and behaviour, save for two things:

I. Francesco Totti
II. The most clutch player no one ever talks about, John Arne Riise.

And as Roma does everything ass backwards, let's start with John. Or, as Carlo Zampa so endearingly calls him, Yawn. (He doesn't, I'd just like him to.)

A few weeks back, post-Zebrette, I posted some of Roma's most memorable magician's escapes. There were six, now seven.

Four of those seven actually happened in injury time; three of those four prominently include Yawn. That's leftback Yawn.

He is not Paolo Maldini or Franz Beckenbauer. He will never go down as one of the greats of all-time on the defensive end, nor should he. We know this, and we accept this.

But I'll be damned if that man doesn't get even half the credit he deserves for everything he brings to the table which is expected – running, health, running, short sleeves, running, gingerness – and not nearly enough for his flair for the theatrics. The header past Gigi? Simple perfection. The sly sneak to the touch and cross to Francesco at the Friuli? Sublime. The flash across the box to Chesty Rosi? Understated genius. Likely intended for Borriello, it was flung with such curl it had ample opportunity to hit either man.

And for fuck's sake, on a team which so often resembles Himalayan ungulates in the winter, the man hasn't worn long sleeves in three goddamn years.

As for Francesco, that must wait until a day in which I can do something more than simply rewrite what was written mere weeks ago, once again.

He too defies words, but for entirely different reasons.

Oh, and Aleandro Rosi is the luckiest sumbitch on earth – but he's our lucky sumbitch.