Share All sharing options for: At Least Someone's Happy 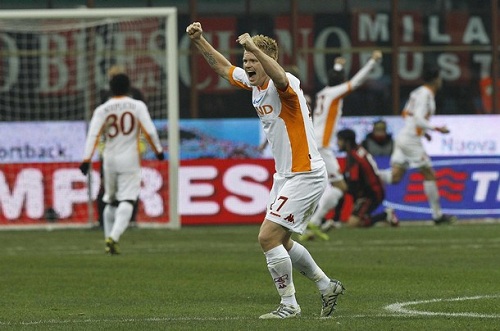 At one point, an ounce of optimism crept into my mind for this game. )How dare it.) After all, Roma tends to play to the level of its opponent, and with ample evidence to the good from just last week, it stands to reason that with Milan as deserving scudetto winners (TBA), Roma will play like scudetto winners.

Then I remembered the game is at the Olimpico, where not only could Milan clinch the title in Roma's backyard with but a draw (And really, who wants that? Which is exactly why it will happen.) but also it means Roma will be playing at the Olimpico.

Roma is now 2-2-5 at home since February 1, with one of those wins in the derby and the other against the mighty Chievo. In fact, they have played the teams currently ranked 2, 3, 4, 7, 8 in Serie A at home, and lost to all but one.

Expectations as they were - miserable and expecting nothing but more misery.

This may not end well, and that's the understatement of the confetti-covered century.