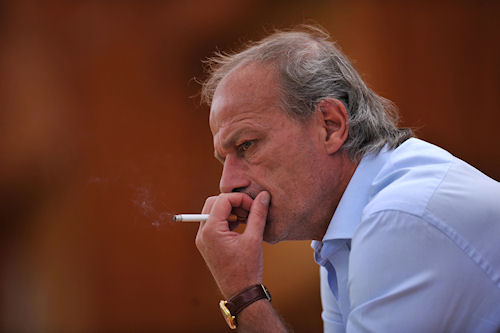 Easily the best purchase of the regime, although his fascination with South American prodigies has be think he may harbor a deep, dark Football Manager addiction.

Easily the worst decision was allowing him to only sign a one year contract. Are we sure a few palettes of cigarettes wouldn't have persuaded otherwise?

I am fighting wholeheartedly to fall into rapturous obsession with a man recently employed by Lazio, but let's be honest:

He's old school gangsta, and there's no other way to put it. There's no doubt that man has skeletons both in his closet and under the foundation.

And he likes young boys from foreign nations. You get the feeling that 'one year contract' is about to turn into a lifetime contract at FC Bangkok.

Does anyone else get the feeling Ownership is constructing both a football club and compiling figures which will transition fluidly to an 80's primetime action drama along the lines of Miami Vice should the calcio side flounder? I haven't the slightest which role Ivan de la Pena will play - on several levels - but for that of Token Bald Guy Who Looks Slightly Menacing If Only Because He's Completely Bald, which...well, that's enough.

Their qualifications may reign supreme, but there is a hint of cultivating an image here too. One with not much interest for conformity and homogeneity.

My hunch says he's suspect. Remember when everyone from Arsenal to Manchester United to Barca wanted Thiago Neves? Vibes.

Bad vibes, and I just can't shake 'em, nor do they really have any justification. Just...

I watch Ajax most every week.

I have never gotten it.

I will likely never get it.

But the position across the board in world football is seemingly weak right now, so whatever works.

Remember when he was the single best prospect - seemingly by some distance - in all of football? When he was setting records which made real life football seem like a video game of a video game?

Is that worth a flier at 20 years of age? Loan, purchase, child abduction - whatever. These are the types of talents on whom you gamble, especially when the possibility remains the hype in that stadium in that city on that team is and was simply a bit too much too early. Fresh start.

I don't even like Bojan, as I'm thoroughly convinced he's really a 12yo girl, but Jesus, he was the future of football not two years ago.

This is why die were invented.