These Are A Few Of My Favorite Thoughts

Share All sharing options for: These Are A Few Of My Favorite Thoughts 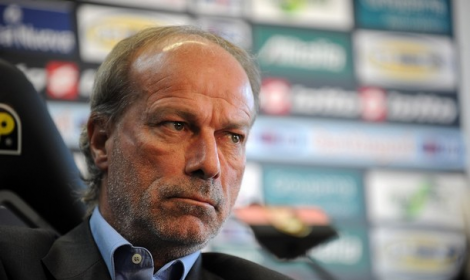 - Has Sabatini usurped Luis Enrique as the face of the football portion of the club? Is that simply representative of the summer mercato upon us, a lack of football, and the eager anticipation of new moves amidst new money? Is this a case of the architect outshining the tenant and its services?

Or is he just that gangsta?

- Would you trade the obscenely high highs of Mirko Vucinic knowing it comes with obscenely low lows for a constant with a lower ceiling?

No - half the fun is never knowing.

-Wondering if anyone has noticed something:

That the sheer volume of rumors and rumors involving a vast breadth of players has seemingly plummeted since the realization that Luis Enrique would be coach. It seems as though there was an initial onslaught of rumors once the summer began, but once the coach and thus system, style of play was decided, when the real work on the market could begin, the rumors, outside of Sabatini's manlove for a Patore-type, have fallen through the floor.

At some point, we have to realize that for us, this is a 'spectator' sport. And while trophies are nice, the endgame is nice, we spend the bulk of our time within a frame of 90 minutes per week, often twice, trying to enjoy a sport. Pastore, to me, is season tickets to the opera:

Is there something tangible to be had at the end of the season aside a drawer full of booklets and a voicemailbox full of money-hungry volunteers imploring you to 'support the arts'? No. But the enjoyment is in the experience, the artistry, and living in the moment. Pastore's the moment.

I realize it won't happen, but one can dream.

- So how long before Brighi's agent asks for a new contract based on the relative wealth of the new ownership and thus wages offered to incoming players with less experience and gentleman suitors and hot cocoa?

You don't expect Matteo to get his own films. You expect the music to be horrible if he does, but not his own clips.

Think about it for a moment: attacking rightback with lots of energy, attitude, pace, desire and a willingness to hassle ball-holders until he's charged with second degree sexual assault. A player to, perhaps, fit the system.

And that's the best part.