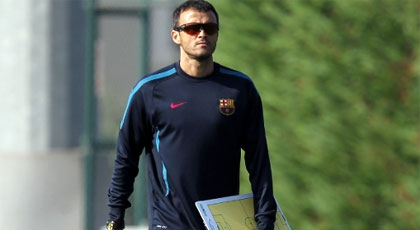 He used to coach Barcelona B. He did well.

No shit, it's Barcelona's youth team. A team formed from the best system in the world.

That's what we've got. That's all. Though I must admit, I do enjoy a good bit of the unknown.

The Grand Imperial Poobah always used to dub Roma a 'project'. This is an 'experiment':

We watched the last few matches of Barça B and we can tell you that what we saw was truly spectacular. Even with young, inexperienced and naturally unrefined players, Luis Enrique's team played in the same way as Guardiola's Barça: pressing, keeping possession, passing, controlling the match, scoring goals and entertaining. He calls it ‘associative football’: a kind of real communism in which the ball is shared equally among all the players and they try not to let their capitalist opponents ever see the ball. “I'm convinced that this model can be exported and that it is not a question of it being part of the Barça DNA. Footballers like to play good football. They can, of course, adapt to other styles, but if their coach has a positive approach, why wouldn't they go along with him?”.

Can you export Barcelona?

This happens a lot in sport. Trendy team woos the world - especially new owners with lofty, if delusional, ambitions - with scintillating performances, obtains success, occasionally relative to expectation, employs a supposedly prodigal coach, and suddenly, everyone's running to the well to tap them for advice and resources.

You know, something like one coach devising a system with no apparent striker and suddenly the world, even the top teams, start taking notes, ultimately following suit until a fad emerges.

Most can admit to enjoying Barcelona's football. They're fluid, smooth and exceedingly aesthetic, while being sensationally successful. They are, in a word or two, the dream. Who wouldn't want to win everything while being the most entertaining team on earth? The dream.

Who wouldn't want to grasp the dream?

Problem is, Roma is not Barcelona. The Roma squad is not the Barcelona squad - not even close. The Roma youth system is not the Barcelona youth system. They have neither the extensive network nor the resources and structure built over years and years and years. It cannot be bought. Churning out a Messi, Xavi, Iniesta, Pique, Busquets, Pedro, Puyol, etc, etc under a certain philosophy cannot be bought. You just can't. It's time.

It will take extraordinary squad turnover to make it happen; to make Luis Enrique's football vision happen. He needs players with a belief in a certain system. Do you see Mirko Vucinic and Jeremy Menez pressing the defense high and hassling to regain possession? Can a 34yo Totti do it over 90 minutes? Is Borriello capable? Can he and Totti coexist if they import the 4-3-3 model? How many truly technical players do they have capable of retaining possession? How many ball-playing defenders do they have in the side? Will the amount of squad turnover required be able to meld in two years, much less one?

This should be interesting to say the least.

You buy a system in order to build around that system. You buy players which build that system, that philosophy. The longer the system lives, the more fallout happens when it suddenly does not work anymore (Why hello there, AS Roma). Not all players are malleable, interchangeable.

This has an overwhelming feel of boom or bust about it.