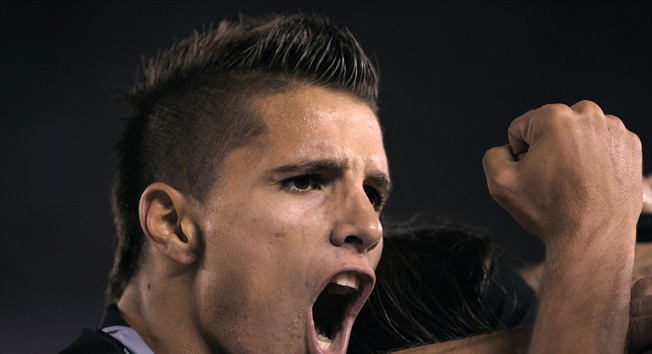 Is it in the past? The future? When the hell really is Erik Lamela Day?

I do not find tangible gain from anything which Roma may or may not do. No trophy won will ever find itself on my mantle, no celebration will douse me in the house bubbly, nor will any seasonal achievement cut me a bonus check. The simple fact is, I realize I play no part in Roma and Roma plays no part in me. Thus the whole winning and losing thing is important, but not so important as the experience itself which, while related, is not synonymous.

Mirko, to me, is representative of the experience.

I find what Mirko brings to be extraordinary on both a footballing level and on an entertainment level, as let's be honest, that's what sport is - entertainment. And while perhaps the two are not present in equal parts - after all, no one wants an in-his-prime Richard Pryor between the sticks, entertaining though he may be (and they're already sending one corpse from between the sticks to Liverpool, so let's quit while we're ahead, yeah? - the bonus cannot be overlooked. The bonus that is too often overlooked: he is worth the price of admission. Or firing up a spotty, illegal stream. He is an experience in and of himself, both off the ball and on the ball. Supremely talented, technically scintillating, while also bringing an air of enigma, of mystery. The lows are low, sure, but the highs are just biblical.

Have you watched Erik Lamela on YouTube? Or watched him with a ball at his feet during the death days of River Plate?

The boy is talent. Not talented, but talent - it is not part of what he holds, but rather defines him. He is a joy to watch, beyond anything that may be achieved with that talent - which is typically the end product of true talent, thus rendering the disconnect (hopefully) moot.

The price may be steep - supremely steep if rumors persist - but right now, he's a poor man's Pastore. Perhaps not as elegant as Javier - and really, the way Pastore glides through a pitch makes gliding through one of Rachmaninov's arias like listening to the harmonies of death metal - but as soon as the ball hits his feet, instant trance.

At his age, it will not always be pretty, not always be ideal, not always be good, but we will be transfixed simply because the talent, the experience and the tantalizing air of impossibility rendered possible.

I wish to be so transfixed, and now, we get that chance to be so utterly beguiled while wearing our favorite colors. This can't be a bad thing. Especially considering I didn't cut the check.

Now keep Mirko too and let's all just enjoy ride on the rollercoaster.