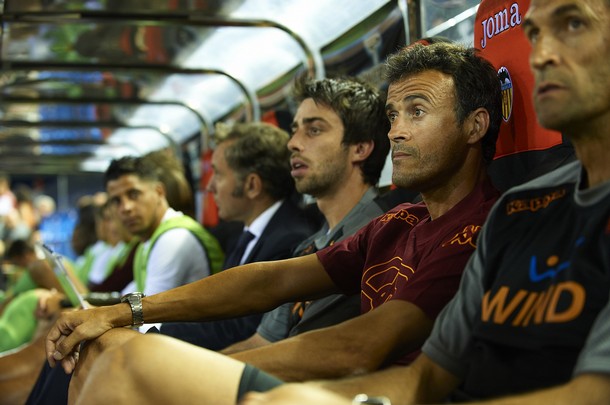 The need for a mantra has arisen.

There is the preschool group and the elders, teaching them the ways and means of the future as they prepare to pass the torch.

(Random observations can, at times, be construed or interpreted as brand and club-building ideologies.)

(Seriously though. This indicates a path to patience.)

(So fucking be patient this year, yeah?)

(But they should probably do better than last year.)

So ratchet down even those tempered expectations a bit and fucking be patient, yeah?

This is a long-term vision. Long-term means growing pains.

(At least until they get bounced from the EL in leg two. Then go crazy.)

Reserving judgment and analysis based on personnel and the need for patience, as many understandably seemed entirely out of their depth.

The problem is one of them was Luis Enrique. His postgame comments did nothing to calm these raging storms of fear.

Welcome back, I guess?

What an odd sequence of events. It'd be one thing to bench him with Totti absent with the idea to retain his European eligibility and thus increasing - or maintaining - his value with rumors rumbling and the possibility of a sale at least...possible.

But to start Okakachukawhatthefuckhappenedtoallthattalent and then bring Marco on as a late sub? Was it a panic move as Sabatini stuffed the whole pack in his mouth and lit the box on fire when Marco's number went up on the board? Did he genuinely think BoKaCa (terrible shame Bojan wasn't named Mojan) was his best option up front? Did Luis seriously so overestimate the ability for eleven people wearing an official AS Roma shirt to completely throw a "sure-thing" European encounter?

Did he study this club at all?

Mostly, I'm confused. Borriello seemed representative of the night itself. The whole night left me confused.

Growing pains - and it seems as though it's going to be a long sequence of those, as Luis' leash is going to be very, very long, one would suspect, as it probably should be. They didn't just hire a coach - they hired a system and a vision, one largely based on youth, then began building for that vision. That takes time, thus this was always likely to be a long year - not that it couldn't be simultaneously successful, but certainly not immediately bounding onto a paved road. Yesterday did nothing to dispel such a theory.