Should Be A Little Early For Thumbs, No?

Share All sharing options for: Should Be A Little Early For Thumbs, No? 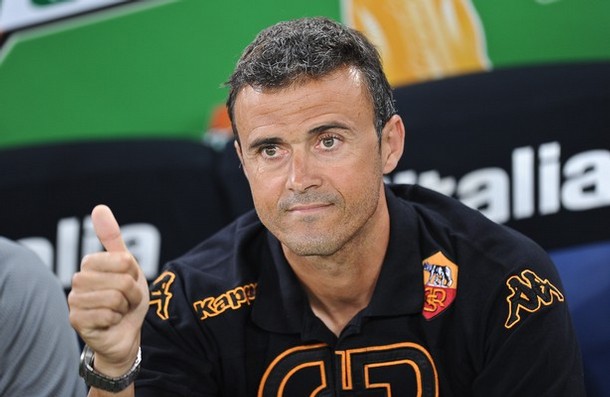 It's pointless to declare the sky is falling without fail, because it isn't - not yet, anyway - but we're eight seconds into the new season and it's plainly evident there are serious problems with this team club on a number of levels. However, one seems to overshadow and encapsulate all.

Let's look at this from an internal viewpoint, as the Totti/Borriello situations and decisions very much do shine a light onto the shambles that could are Roma right now.

The Borriello thing was an ode to stupidity, to put it bluntly, and doesn't shine well on LE's decision making. He cost the club millions by playing a disgruntled player out of position for ten minutes with little to show for it. Fin.

Totti is an icon, a symbol, a talisman and a demi-god. Totti is Roma. Totti is all of those things and more. Totti is Totti.

But it's not because he was born as those things. There is no noble blood which grandfathered him into his status as a Roman legend. No amount of nepotism could erect the statue of devotion Totti has built for himself over a long and storied career.

He is all of those things because he is the best player to have ever worn the colors. He is the single most impacting player in the long history of this football club. And he is still, today, the best player to put on the shirt, week in, week out. He has earned the right to be on the pitch in crunch time because he's simply the best option. Individually, on the whole or from any angle one might choose.

The problem isn't that Luis Enrique needs time or our patience or the fans' understanding. No. It has nothing to do with us.

He has no cache. He coached a reserve team in the Spanish Segunda. Doing wonderfully, yes, but not in the top flight, not in Europe and with loads and loads of readymade talent which was arguably better than you'll find on most other second division rosters. They were kids. Kids are not adults. Kids are not World Cup winners. And kids are more apt to listen to an authority figure on command than a bunch of highly paid veterans.

What do you hear among everyone who steps off a plane in Rome? "It's an honor to play with Totti." Scooby Doo said the very same just yesterday. He's an icon, but he's not an icon for the simple sake of being an icon. He's an icon because he earned that status through his footballing. Every year. Every single year, including last.

Now, this isn't to defend Totti or make a case for him and one against Luis. That's not the purpose here. The purpose is to point out those to whom this matters the most.

It doesn't matter who or what Totti is. His name is irrelevant. It matters that Luis Enrique has seen fit to remove the player who gives them the best chance to win at crucial times, and the rest of the players on the team know that. This after benching him in the first leg, which likely proved costly.

Whether or not he needs patience from us, management or the press is irrelevant. Players won't have that patience, nor should they. It would be one thing if Luis was hauling a trolley car worth of trophies behind him, but he isn't - he has nothing, as far as most are concerned. That doesn't mean he's automatically chalked off, but a bad start - and this is an abysmal start - means human reaction comes into play, and the reactions, based on evidence throughout preseason and the Europa League cessation, will be very human. He may have earned their respect on a training pitch, from shepherding the world's most gifted youth team to impressive heights, but where it counts? Not yet. Not even close.

He's going to lose the locker room, if he already hasn't. What he's done is drawn a line in the sand, and unfortunately, his sand is on the sidelines. This is not about picking sides - it's about picking the best opportunity to win. That doesn't mean that Francesco Totti being on the pitch will always serve as the best option, but it did yesterday, and it did last week. Even Slovan's coach knew it. This isn't some extraordinarily abstract concept.

He already seems entirely out of his depth, and this is supremely dangerous for a club which is building its future around his ideologies.

At this rate, and this is the whole point, the whole concern, LE will lose the locker room. After that, no matter how patient the suits may be, it will be his job. What we think matterns not - what matters are the ruminations behind the Trigoria doors, and I can't imagine for one second, regardless of what is said in the press, it's particularly positive at this moment.

They sold off their best players - let's not ignore the curious wage cutting taking place and absolve the tippity top - and brought in a radical concept with implementation difficulties to be dumped out of the Europa League by Slovan Bratislava.

If you were Simone Perrotta, what would you think?

That doesn't mean Luis Enrique is the wrong choice or it won't work in the end - he may very well be the perfect man to lead Roma (doubts are lingering, but it is possible) - but the amount of initial damage can be irrevocable and if that happens, we'll never get the chance to find out.

Operation damage control has begun and the season hasn't.

* - Totti is so infrequently subbed, I forget, but I'm fairly sure he heads to the dressing room every single time to ice up immediately - a preservation thing. Surely this is sourced somewhere.