Share All sharing options for: Loco For Lucho Puffs 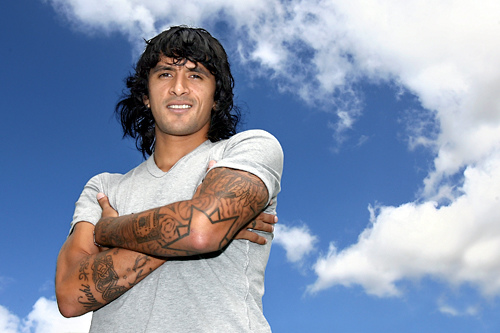 Gifts Not Getting Rid Of Doni, Which Was Actually A Gift And Is Thus Somewhat Comical

Do you like all-'round midfielders of a supremely high quality ?

What the hell's your problem?

Plus, the star tattoo quota needs be met and refreshed with Mexes off in Milan doing things we're maturely pretending are not happening, like being in Milan. (A nagging voice is telling me Cicinho's pulling his weight as well. I don't know why.)

I do enjoy the parallel storylines, however, that Marseille is having difficulties with the burgling of its players - actual robbers, not the club itself, which has happened - thus speculation some want to leave or they'll have difficulties finding new recruits, as isn't this a speculated element of Philou's departure this summer? (If mine and mine alone - but it still counts.)

No one tell Lucho - mum's the word.

(So long as you're not Talentino with Francesco within earshot.)

There seem to be conflicting reports of who's reached an agreement on what, though the discrepancy in salary (€1m) seems rather constant, which is lifetime @#$%ing achievement award for Italian media in the months June-August.

He's worth it on all fronts, age considered (or especially?).

I practice it. Hate me.

When the idea was to "make the squad younger", one thinks that, yes, youth needs be brought it, but it also requires the nursing home vets still pulling down paychecks from their motorized scooters (looking at you, Cassetti) would find themselves jettisoned in lieu of the younger models while those in their prime remain to build some mammoth juggernaut prepared to dominate immediately.

(Play along with me and don't dissect this on a case-by-case basis, because it can be done.)

It seems that OG & Co. are busy extracting the middle group:

All, respective to position, relatively in their prime or approaching their prime. This isn't how one expects to get younger - then again, it wasn't expected they'd go through a preschool revolution.

Keepers are arguably a wash.

Thus we have a disconnect - for both footballing and financial reasons:

There is the preschool group and the elders, teaching them the ways and means of the future as they prepare to pass the torch.

(Random observations can, at times, be construed or interpreted as brand and club-building ideologies.)

(Seriously though. This indicates a path to patience.)

(So fucking be patient this year, yeah?)

(But they should probably do better than last year.)

Deconstructing My Own Theories

What exactly is one's 'prime' in Serie A?

Because I'm pretty sure by calcio standards, Francesco is just entering His.