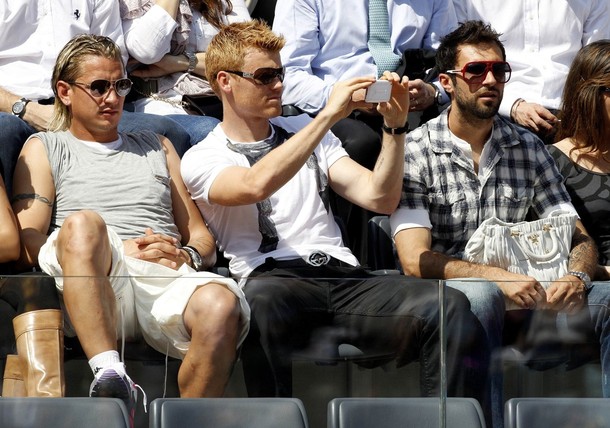 There is little of note to say about Roma at this very moment. We stand back and await the wave of Walter's wizardly wand.

I say things when I have things to say, don't when I don't. A bout of silence is a bout of good fortune, otherwise you get forced nonsensical bullshit, like the fact that Borriello's hair gives me hope for the new season.

Does Borriello's hair really have an impact on the new season?

Well of course it does, silly.

Doesn't depend in which shirt that hair is playing in, either.

- Mirko seems perfectly thrilled to be playing in stripes and loving his new woman - older, haggled, did time in the slammer - moving on long before the relationship was over, keeping us all stringing along, aware of the signs, but still forced to live out the day-to-day of civility and cordial interaction until he could literally move out. I'd like to take this moment to maturely and wholeheartedly say fine, I never loved you anyway and slam the phone down amidst various acronyms for stupid phrases streaming across my SMS. Because that's how real adults handle things.

Seriously though. Fuck off and die.*

* - Apply this sweepingly to Juve as a whole and let it be known, no ill will.

- Upon arriving in the door and flipping on PSG, I was just in time to see Jeremy Menez subbed off in a crucial moment chasing the scoreline amidst a panorama of disappointed faces.

There are these players whose simple determination, will and seemingly self-replenishing engines outshine their actual footballing skills. Fullback is a good place to plant those abilities, typically, unless you have a season like the one John just had. Or: Unless you have Juan bailing him out time after time as he did in 09-10 which made John seem like he was playing at a far higher level than he really was. When Juan died, so did the other. This isn't coincidence, I don't think.

Nonetheless, he was good, he was dedicated and he was a goddamn warrior without a serviceable backup for, well, ever, and provided us with severable moments of clutch. The man does know clutch, which should get him in a Hall of Something, Somewhere, considering he is a fullback and all.

Quickly he will be forgotten as eyes dazzle upon gazing the younger, newer, more talented model, but players like Riise don't simply grow on trees. Never underappreciated.

We must also remember did all this while being so terribly afflicted: a ginger. God bless him. And I bet Jose Angel will wear long sleeves in the Siberian night, too. These are the things to mourn, my friends.

(No, I haven't a fucking clue what that means anymore.)