I Need A Hero.

Share All sharing options for: I Need A Hero. 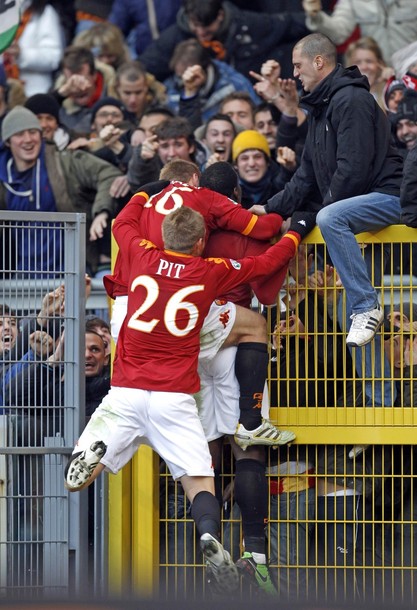 I don't. Not unless I have an extremely biased and passionate opinion - do note this is not an infrequent occurrence - towards one of the involved parties. Why? Because I need shit to make sense. Underdogs winning just doesn't make sense to me.

That isn't to say "looking better on paper" necessarily means one team is better than the other - certainly not. There are a number of factors which come into play that aren't always as readily apparent as goals, transfer fees, or how many combined showgirls one team picture boffs on a given weekend (7). It also doesn't mean I don't enjoy finding something from nothing, or enjoy reveling in the misery of others. (Love that.)

It's hard to call Roma a big money team right now when their biggest purchase was "only" €17m, and he's spent most of his time handing over possession while geeking out with Scooby snacks. However, they spent some change in total this summer - fourth or fifth most in Europe, I believe - and in the process irrevocably altered the identity of this Roma. This is no longer a mom & pop club, which, for many, was part of the allure. Nonetheless, irrelevant.

What is relevant is that Siena is going to waltz into the Olimpico to stare across the pitch at a new Roma and inevitably find themselves bewildered. That Siena has undergone a relemotion - trademarked - yoyo and thus morphed equally is details destroying the point, so shut up.

Because this Roma has suffered through a complete facelift, the irony of which is likely not lost on Miralem Pjanic. And because this is the last thing that happened when Siena traveled to the Olimpico.

Be honest: Did you ever in your life think you'd live to see the day when Adrian Pit would be sprinting to Curva Sud to celebrate...and having been an integral part in the reason they were celebrating?

Because Roma could win the next twenty-five Champions Leagues in a row and I will still be telling my grandchildren about the day Okaka backheeled in a cross from this Romanian nobody who was for years nothing more than a simple punchline. Football is romance and romance is in the unexpected.

Trigoria's self-moving training cone Superman-ing Daniele De Rossi at the gates of the Curva Sud is far better than anything money can buy. Because you can't buy garbage suddenly turning into a stroke of absolute genius. You can't buy that element of utter shock and deliriously wonderful surprise. You just can't buy alchemy - you can only buy realized expectations.

And with a rare hint of the serious: The year 09-10 was fucking magical. I don't think we'll ever see something like that from Roma again in our lifetimes, and they didn't even win anything. In fact they lost. Across the board. Making it almost the perfect narrative for a Hollywood script.

Whatever one thinks of the current state of ownership, that era was extraordinarily special, because they did it all on merit, all on the squozen penny, all on the back of the football itself, and they did it with a flair for the infuriatingly dramatic which no talent scout or director of sport could ever script with a pen, a legal pad and a checkbook. They may forever be our fair giallorossi, but la magica needs to be on hiatus until they deserve it again, simply out of respect for what was so utterly magnificent, so unexpected.

* - And if you'd like a reminder of "what once was", feel free to read back through the post from which I mercilessly extracted that glimmering beacon of contemporary art atop the page. Dear Francesco.

This may or may not have been constructed entirely in my mind. That doesn't make it any less awesome. Or possible.

* - Either it's Maaaarten thinking he's Gigi (not happenin'), or us pretending Bogdan is Gigi (is happenin'), because Bogdan don't do clean sheets**.