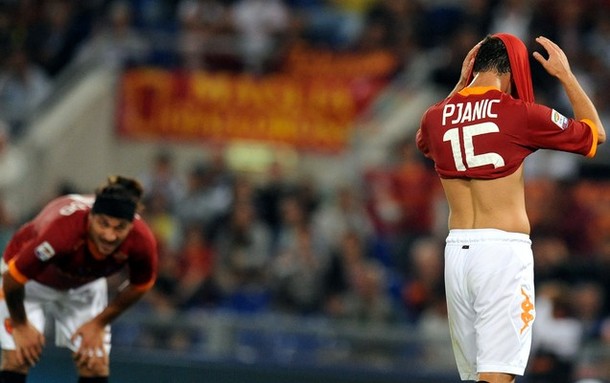 Watch the game? If not, don't. Roma was thoroughly whipped by a far inferior team - Siena deserved to win, and likely would have if Calaio hadn't spent the evening unveiling his best Pippo (though credit to the centerbacks) - while again struggling to play the current brand of football, which lends more credence to the "Inter is fucking rubbish" theory from the weekend than "Roma's showing progress" - because Roma's rubbish too.

If you did watch...you poor, poor bastards.

This, for me, is rather simple:

This is not Spain. Italian teams are not Spanish. They are highly tactical, exceedingly capable defensively, adaptably so, and those with lesser individual parts can still manufacture a whole far greater than the sum, particularly when they know, understand and plan for one's inherent weaknesses - bountiful with Roma at current.

[I do hate myself for doing this, but let's be honest - LE's shredding his pages from the FCB playbook, with Daniele De Busquets' new career as ample evidence. What are we left to do?]

So you want to be Barcelona? Great. Me too. Barcelona has a nice style. They have a wonderful aesthetic and a glittering trophy collection. They also have a collection of some of the finest individual talent the game has ever seen. That, among many other things, including that most of the current squad either cost a mint or came out of the womb playing a slick 1-2 in the same kit, not their style, contributes more to their greatness than pretty, pretty tiki taka. (Direct runs help too.)

AS Roma does not hold such a collection. Not even close. Daniele De Rossi would get into Barcelona's lineup. Jose Angel would get into their rotation. Bojan perhaps, but only because he was circumcised at La Masia. Fin.

One might assume FCB-B, relative to the second tier competition (which is mostly a bunch of athletes playing voluntarily involuntarily), may fit the talent mold as well.

Either find a new system of adaptation - a slower, more labored method of adaptation, one which takes into account and respects the nature of the opposition - or reassess the system itself, because lack of progress is one thing to the players - regression is another entirely, and regression rears its ugly head in the locker room like Cassano on a bender. Regression and poor results also breed a lack of confidence - in themselves and in the system. What follows thereafter is a slippery slope. Blindly asking for patience over the long term is fine, but it's dangerously playing with the fire that is the human element of the athlete, which is crucial in all sport, and if you've been a Roma fan for more than a day and a half, you'll know how much it's amplified in the capital. The need for patience works both ways.

There are two sides to this coin: Roma will get better the more they play this system, but so too will the ability of the opposition to counteract.

The blueprint's been written, and it's inherently Italian.