For The Love Of Fat Bottomed Brazilians

Share All sharing options for: For The Love Of Fat Bottomed Brazilians 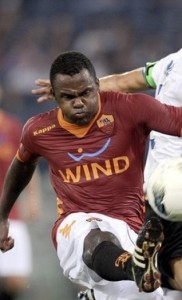 Poor first half, great second half. I could get used to this.

And Fabio is happy, thus we're all happy.

92' Google Images has crushed them.

89' Thought: does Kjaer wear long sleeves? Denmark isn't quite as far north as Norway, but it's certainly up there. Plus he must want to show off his tattoos....

87' The last several minutes can be best described as "owning far more work than one would expect from a 3-0 Coppa game in the final ten minutes".

79' So right. Third sub already used. I thought Enrique came from the same school of coaching as Pep, which dictates the third sub is kept through injury time?

78' It's worth noting Borini is wearing purple boots, which could be confusing some on the pitch who judge teammates only by the color of their boots, not their shirt. Or face. Or anything useful.

Or maybe it's just magic.

75' This would be a good time for some Caprari action. Or getting one of the two holy men off the pitch before they yank something.

Passed the ball just out front of the box, sliced to the right, finished excellently. He's a keeper. Neto's not.

71' The good guys now pressing with the lead again, fumbling through some chances.

68' Angels coming on for Cicinho.

Classy finish, but Borini did the work hustling on high pressure, pass to Francesco, who fed Erik for the simple tap-in. Bojan, find a nice seat on the bench.

63' Cerci immediately works a shot in the box after peeling off Kjaer. Remember when he was talented but the worst decision maker on the planet? Of course.

Plus Scarecrow on for Fiorentina to, umm, rousing applause........

56' Bojan...Lamela....shot saved. Wannabe Jesus' footwork to create space from nothing is just incredible.

And Fiorentina back down the other end is cleared from in front of goal by who else? Simone.

Why? The Magic of Senior Citizen Italians. Perrotta and Totti caused trouble, Lamela drifts and gets the rebound to casually slot home.

That was what we'll call 'less than good'.

45' Francesco drops a gorgeous ball for Cicinho, arguably Roma's best player going forward, who crosses to the no one waiting in the box.

44' They're getting better, but the only execution I'm seeing is still my own.

41' Cicinho's all over the place, which is delightful - most of the time.

38' Even Francesco's threading woeful passes. This reminds of the Claudio days when they were given strict instructions to spend the first half contemplating anything but the football match at hand.

35' Even Maaarten's nearly falling asleep with some closer-than-necessary passes as yellow shirts converge. This is a rather dire affair from the ketchup and mustard perspective of matters.

...and saving a Totti shot right into his legs.

30' Cicinho sends in arguably the best cross of 2012 for Roma, and Bojan leaps for it, but comically misses it by about a foot, whereas Osvaldo or anyonenotBojan would've had it hit them in the face.

28' Bullet dodged as Montolivo's girlish hair was galloping in for a 1v1 but the pass was just a bit behind, just like that hairstyle.

23' The last few weeks have me thinking Bojan's loan may get cut short and Roma will take the mandatory buyback cash whenever it comes.

20' If Fiorentina doesn't score this half, I will be flabbergasted. Their attack is far more cohesive than Roma's defense. Or midfield. Or attack.

19' Fiorentina flash about 47 balls across the goalmouth, and inexplicably get stuffed by Cicinho twice. Yes, Cicinho. Defending. More than once.

17' Wannabe Jesus stonewalled by Pasqual during his designs of slaloming Mirko-style through the yellow-shirts.

16' If Francesco starts seeing enough of the ball, good things will happen, but right now, it's Jovetic's world.

Kind of an asshole move starting him in the Coppa, when you think about it.

15' Fiorentina are consistently playing with numbers on defense and numbers in the attack.

12' And Jovetic-Ljajic again, the latter stuffed by Maaaaarten. This could get ugly. Is getting ugly, really.

11' And he dinks in a gorgeous ball for Ljajic, who hits it at the wrong angle high and wide.

I'm not entirely sure who's on the bench, but I'd throw them in too.

10' Take away Totti and Lamela and I'd swap this entire lineup for Jovetic in a heartbeat. I know I say that, and I know Fiorentina would laugh in my face, but it wouldn't stop me from trying.

7' I'm fairly sure this lineup, as constructed, if confronted in the darkened corners of a back alley by a group of menacing looking chaps would embark on a flurry of slapfighting the world has never seen from a group of men. But they might win, because you know Taddei would fight dirty.

It's like a dancing street gang from the 30's.

4' Francesco's agenda for the day is "attempt the most outrageous things possible, succeed most of the time".

3' Roma making triangles with Stekelenburg in its own box and David Pizarro isn't involved.

It is extremely annoying how infinitely less detestable Fiorentina became once they shuffled Mutu off to Cesena and Sinisa to where every club he coaches is most successful - unemployment. Plus they've lost Gila's incredible ability to simply be annoying and remained consistent with Jovetic's likability.

You can almost not hate this team, like when Luca Toni and Cesare were running riot. Which makes you hate them all the more.

Please excuse me while I wipe the drool from my chin after watching the swerve on that Di Natale free kick.

Now, after getting inexplicably excited about Fabio Simplicio's rumbling rolls and all the havoc he causes for both teams, creating delight in my life, he's been removed from the squad because there is no God.

Win it for Fabio.

Who's going to have the balls to start actually placing Totti where he plays now, in central midfield, like Carlo Mazzone called about four years ago?

Obviously that's just speculation, but you get the feeling Luis has been sitting around since late Sunday evening figuring out the best way to get the average age into the "my girlfriend still wears Hello Kitty and she's not being ironic" region.

STOP ANNOUNCING THESE ON MATCHDAY. @#$%.

How am I supposed to sleep at night?