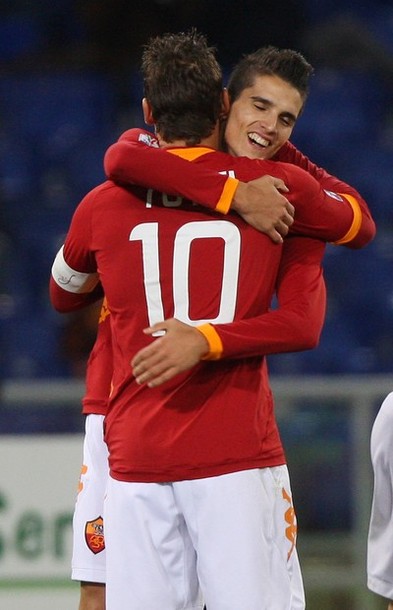 Can we all do something here?

Even those whose hopes are so tightly wrapped up in a fear of disappointment have to admit that Erik Lamela is showing all the signs of being The Next Big Thing. Most, if not all, can also admit that #10 is finally looking to have, at the very least, someone who could potentially be an heir. And it's not Dare Vrsic.

Go ahead - admit it. The most cautious curmudgeon in the room still, somewhere, registers that this kid has all the hallmarks of someone whose children I may threaten to bear someday.

(Note: The threshold is often low, but work with me, alright?)

In terms of pure skill, the last in these waters was Cassano. Yeremy had talent, but not on this level. Nowhere near this level of silky smooth technique, composure, intelligence, vision and execution at such a young age. He's far from perfect, far from the polished stone - in fact, he doesn't need to execute anything at all right now, if he does - but it's right there, plain as day. Kid's a phucking phenomenon.

And the most promising thing from Fiorentina wasn't the goals, wasn't his composure in the box, but rather a moment in the game which is unlikely to stand out.

The quality is awful and mirrored to boot, but the point is made. This is Serie A. I've seen grown men put in impromptu Cirque auditions out of nowhere when the wind picks up the fabric on their shirt just a hair.

The promise of his skills and that determination - if he had a helping hand too - is worth far more than any Coppa victory will ever be.