Share All sharing options for: Of Eighty Minute Naps 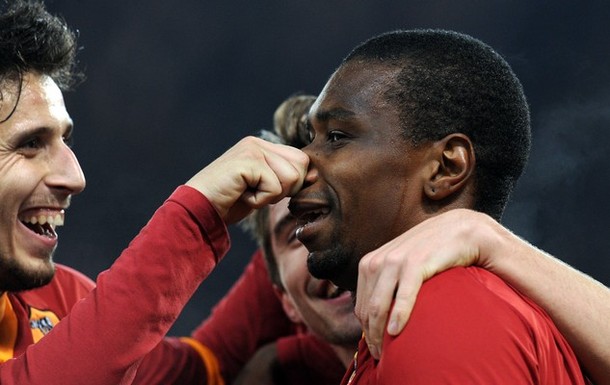 Well, naptime then became playtime. Which typically - at least in my average day - then begets milk and cookies. Or do milk and cookies come before nap time? Is 'milk and cookies' merely analogous to the performance of Totti and Erik in the opening minutes?

I think we've all learned a valuable lesson in recent years: the closer Roma gets to behaving like toddlers, the better they're playing.

The only difference is they now have players who show up to work still wearing diapers.

In the shell of a nut:

Roma was excellent for ten minutes, Cesena never even showed up, Roma got really lucky in those ten minutes, and then everybody went to sleep (granted, Roma was still very good amidst their slumber). They also got rather unlucky in the no red card, no penalty call on the palming in the box right after the third, but given how things were looking...the referee invoked a mercy non-call by not sending Cesena down to ten. And probably rightly so.

This team is currently so hit-and-miss by the half it was nice to see them hit from the off...and then keep hittin' until the game was put to bed within the first ten minutes. Clinically efficient, really, since it should've been four within that timeframe.

Actually, upon further review, it's almost as though scoring goals was a chore and their "playtime" is knocking the ball around the back and letting Gabriel Heinze have more touches over ninety minutes than Xavi has in a @#$%ing year. And normally, they'd just get right to "playtime" without doing the work which then prompted the reward. This time they did the work and earned their reward, and everyone's happy. Lesson learned?

You know, applying the methods of parenting young children to professional athletes just might be the secret to great coaching.

A crunch of time, but to be continued...

For now, just this: with an eye to the long-term good of Roma, Fabio Borini and Erik Lamela should start every single game together until they prove they shouldn't. One man to do the magic with the ball, the other to go find it.

Never taken for granted on the pitch, but the records? It's Totti. Come on...