And The Slightly Pudgy-Faced One Shall Lead Them Through...

Share All sharing options for: And The Slightly Pudgy-Faced One Shall Lead Them Through... 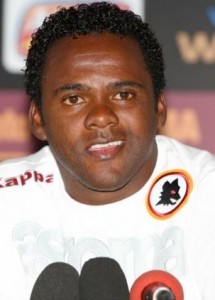 Simply put, Juve were and are better. The end.

And (fortunately), I have to bolt. So I'll call it: Game

87' Juventus is doing other things now, none of them are beneficial to Roma, while Heinze just got away with a handball.

86' Kjaer does what Kjaer actually does really well - clears one off the line.

80' Estigarribia flashes a shot just wide of the post. He's been excellent.

79' Great run by Perrotta from midfield with an equally great pass from Angels, but defended well. The little things. Ya know. Like defense.

78' It is highly likely Juventus at least gets a third by the time this is out....

Hey! Kjaer made a tackle!

73' I believe Lamela's final act (or one of them) for beloved club River Plate was to slyly punch an opponent in the gut. He fits in well in Rome.

72' Smartly, Luis pulls off Francesco for Perrotta. Yessir, they're punting the rest of this one.

Totti yellow. This could get, is getting, ugly.

71' Just like old times, Roma actually works a chance down to ten...'cept it's offside. Cheeky backheel to an on-running Borini by Totti, though. Highlight of the game.

And Lamela kicked Chiellini in the little Giorgios. Yup - that's going to be a suspension.

He really might be the new Totti after all.

69' Roma break, kerfuffle ensues after the ball heads out of bounds with Chiellini on the ground, and Lamela's shown straight red.

Hey, let's all just throw the wheels off completely.

66' Estigarribia causing more issues, earning Fabio a yellow after he was forced into backup defensive duties.

62' And Borini gets to space to head one over. See? Contribution.

Matri coming on for Borriello, who gets a deserved ovation. Roma could use a striker like him right about now.

60' Granted, someone has to get the forwards the ball for them to be properly utilized. That's a struggle today.

Borini for Bojan. As expeted.

Bojan is useless. He's got 1.5 years until he's farmed out to Mallorca with a three million euro buyout clause.

56' Estigarribia, who's now going to have wet dreams of playing against Rodrigo Taddei at rightback on a weekly basis, flashes a cross into the six just ahead of Borriello and Marrone. That was a third gone begging.

54' Let's fire up the Borini-for-Bojan watch, shall we?

Though I'd like to see anyone sub in at the moment. They have intent and are a little bit more direct, but the execution is lacking significantly.

52' Play decidedly slower - so too is the interest in this game. Nothing appears to have changed with the half.

48' Juve again pushing numbers forward like Borriello's exes are holding a kissing booth in the Roma box or something.

Of note: there is now one week remaining in the winter mercato, and nothing in defense has changed. Nothing. I believe at the end of the summer I said that spotting talent isn't quite the same as building a team? Feel free to apply that here as well.

They've proven they can't be judged based on one half alone, but they are just woeful right now and appear to simply be the lesser of the two teams.

43' In case you've missed anything, both teams are circling the ref and Roma's threading it around the back while winning the occasional foul.

Or: business as usual.

(Great free kick by Pjanic a yard or two wide.)

40' And Estigarribia on the left of the box with space puts it high and wide. I've been hearing his name far too often today.

39' Yellow for Pjanic tackling like an attacking mid should. (Poorly.)

37' I realize that in and of itself this means very little, if that, but I would love to see a percentage on the number of times Kjaer is the man closest to the goalscorer on goals conceded when he's on the pitch. I suspect it to be high.

35' More Possession Stat Mafia; more of nothing else at all.

32' Thought Totti wins a free kick just outside the box. So that's something. Barzagli yellow for having other ideas as to what constitutes a free kick.

Roma's getting manhandled. That's all. Just...across all facets of the sport right now, it's Juve's game.

28' Fabulous Fabio lofts a ball to absolutely no one. Roma's game in the shell of a nut.

27' Liechtsteiner has a farmer's tan. Wonder if he's been milking cows. Or Quagliarella.

26' There is simply nothing going forward for Roma. Their best chances have come from set pieces, and even those are infrequent.

24' Both teams appear to be doing the bulk of their work around and near the Roma back line. Not quite the recipe for a victory on the good side of things.

22' Juventus break again with direction and pace. This isn't cool.

Borriello down in the box - appeared to be a penalty on Angels. Nothing called.

20' Kjaer on the ball as the last man provokes heart palpitations like never before.

18' Juve's shape and transition to attack is rather simple to watch and interpret.

Fabio makes his first bombing run for a pass too high.

16' Erik the Great gets his first opportunity to dance and dance he does for a corner, which finds the head of Mexes -2.0 and goes over the bar. An excellent opportunity, that.

14' Estigarribia is officially having a fuckin' field day against Rodrigo, this time beating him for pace and centering a cross. I'm not entirely sure there's an answer for this on the pitch, given Rosi's penchant for card-grabbing against rivals.

11' Storari is now playing the ball behind himself. This team was made for David Pizarro.

9' Estigarribia given a yellow for failing to respect the rules of the whistle. Keep the cards coming, because what this game needs is more empty space...

Could that have felt inevitable in the first five minutes? Juve bomb forward like fucking banshees and Roma, well....defense ain't their thing.

Giaccherini. 1-0. I turned away for a moment and someone had been torched - with Kjaer missing the interception.

5' Borriello galloping forward with nothing but space. I suppose he's probably more in favor of this style of play...

2' Serious question - which is more frightening:

Given the past few years, I vote Storari.

1' Juve's pressing high like Barca on speed. And Borriello with a point to prove.

Who's excited? This feels nothing like Juve games of the past, and yet...it's all the more.

Is anyone running a tally on which of Lichtensteiner or Angels spends more time in their own half? It's going to be something like a tug-of-war in movement, with it directly related to the motion of the other.

Everyone's on the pitch and a blonde Roman CB is all tatted up and lookin' for trouble. Just like old times.

I really hate to admit this, but I really, really like Luca Marrone. His appearance this weekend did nothing to aid this in any way. I'd package a lot of people for both he and Marchisio for the next six-ten years.

I'm going with a Romanian stream (recommended) again both because they're of the highest quality and because I have no interest in understanding anything but the monotone drone of men picking up a paycheck.

Speaking of picking up a paycheck, Del Piero starts.

Fabio Simplicio can appear to be both brilliantly cunning and have no fucking plan for what he's knocking into on a football pitch.

And that's the best part.

This is, of course, a match against Juventus, meaning its stature is far greater than that of a 30+ Brazilian backup sitting in midfield.

i. Luis has learned rather quickly not to play Rosi in games where emotional attachment as a fan might be a factor. Well done.

ii. Borini's on minutes quota after coming off injury.

I like Bojan. I really hate watching him play, particularly for Roma right now.