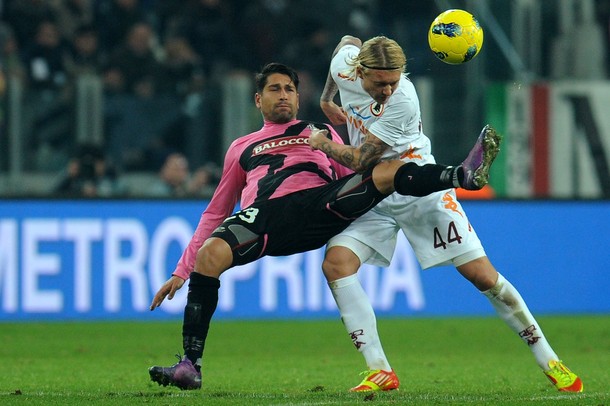 I'm going to do something rather ridiculous here. Quite ridiculous, really.

This is rather easy to say since it's not my money - any millions I have in the bank are earmarked for the scientific realization of those much ballyhooed pink fluffy unicorns and the fucking gorgeous rainbows they dance upon - but put me in charge (heaven help us...) and I'm picking up Kjaer's option. Rather soonish. And possibly under a fake name, but still.

Quick: name another 22 year old central defender with his talent floating around Europe for 7 million euros. (Or whatever they can whittle it down to.)

Well, perhaps Subotic, but that's only because 7 million is the tally on his bail.

He's been nothing short of a colossal failure, nothing short of a regression upon his previous Serie A form and, quite frankly, a liability. There's something off about his game, no doubt. That doesn't mean he's not a sound investment. There's just simply no denying his incredible ceiling - and high ceilings in Rome are undoubtedly worthy.

Lamela: The prize jewel not of the mercato, but of the last several years. If there is to be someone who can attempt to assume Totti's throne - blasphemy - Erik is it. His skills make the finest silk seem sandpaper in comparison. Probably the best thing to happen to Roma since Talentino's transfer.

I just can't tell whether it was Antonio coming in or going out.

Pjanic: It's not as though he's ever likely to contend for the Ballon d'Or, but he's both an excellent footballer and an excellent fit for the system. As known from day one. Six months on, the only reason I can possibly see for Lyon letting him go so cheap is questions of his long-term durability - he takes heavy knocks and looks like he's built of a few birch saplings lashed together. Other than that, I've got nothin'.

J. Depp: Back when Luca Toni appeared to be/was the big purple Second Coming - 'cept he always moved like he had a cross on his back - and was knocking goals in like they were going out of style, I recall a commentator saying something which could be best paraphrased as "He misses as many as he hits, but he hits enough so that it doesn't matter."

That's Johnny. Kind of - the homeless man's edition, which is how he often dresses, appropriately enough. Hooray for symmetry. His first goals were almost accidents, but he gets himself into positions which make them happy accidents. And then he just became a really solid forward...so long as he doesn't touch the ball outside of the box.

The problem is, with a team constructed like Roma at current, you want more.

Borini: Fabio just might be more. He's had some woeful games (Parma, was it? Was that in his loan contract?), but his movement off the ball, to the ball and within the box is excellent, while typically making his movement in that forward direction. Fabio's going to make his runs to touch rather than set and that's colossal in a system which is comprised of about 42 bodies who need or want the ball at their feet at all times. At the very least, continually putting the ball on net tests the keeper, and as we saw with Cesena, that can reap its own rewards even if the initial shot is saved.

It's awful early to say anything definitive, but he just might fit best over the long term. Obviously the only regret is they didn't nab him for free, but certain technicalities - like the whole farm being for sale - prevented such a move.

Angels: He looked to be the real deal for about 135 minutes. And then...Serie A happened.

This is why defenders need Serie A experience. This is why young defenders, no matter how talented, typically need to be paired with a solid veteran. Epic talent and one who would thrive in a land like La Liga, one who will likely thrive for Roma soon, but the here and now is much painful growth. Unthinkable a few months ago, a loan move to someone who'll run him out weekly in the peninsula might be a really smart move.

Lady G: Yes, he's on a loan, but his seems a bit less significant than the those of the youngsters.

He's a solid player. He does absolutely nothing for me either way and frankly, I hope there are better options when the time comes in the summer.

Though with Cicinho moving on, they may need him to fulfill the neck quota tattoo. Again.

Maaaarten: Has anyone noticed he's been much better since Lucio kickered him in the head?

That was a cruel, cruel trick.

I think that says more about the state of Roma than Gabby, who was supposed to be CB four/backup LB. Now he's the first name on the backline if Juan's voodoo doll falls into the tub and his legs get a bit soggy.

That's not how it was drawn up. (The Heinze part.)