The Second Time Around

Share All sharing options for: The Second Time Around 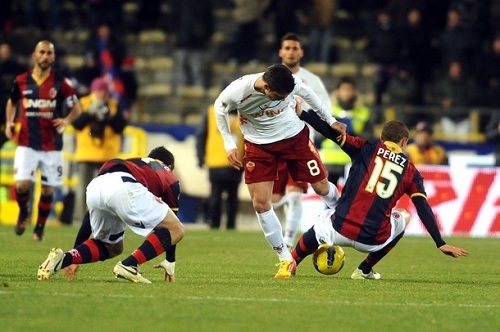 Now you can firmly judge Luis Enrique. The style has both had ample time to gel - and successfully so as indicated by results not against, well, nevermind - and opposing teams have all seen it in the flesh. Have at it.

Things I'm hoping for from the second half of the season:

- Erik Lamela being less Francesco and more Totti.
- Simon Kjaer being run into the ground until he's an excellent defender again.
- Rodrigo Taddei.
- Bojan going scoreless.*
- Rodrigo Taddei.
- Maaaarten kicking Lucio in the head.
- Luis rolling the eight-sided die that is 'Who's going to be my third man in midfield?'
- Luis always rolling wrong.
- It not necessarily mattering.
- The inevitable cameo of a certain Primavera phemon. (It sounds better than phenom.)
- Rodrigo Taddei.

Oh, pardon me - I'm just trying to figure out where Aleandro Rosi comes in order of names Luis Enrique writes on the team sheet.

I like him quite a bit. Pretty sure anything above twelfth is "too high".