One day, someone will pen a grand story about Francesco Totti. Until then, he's doing it himself.

The talk of the town is Totti, as it often is; his performance a magnificent display of footballing greatness, et cetera, et cetera. However, take a moment to peruse the day's lineup and see if you notice anything. 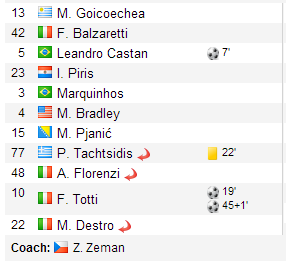 Arguably his most impressive feat is that he skips nary a beat with one year total of Roma experience from his teammates before the summer. Offer the man a ball and some warm bodies and magic will be made.

Now that the gushing is over, a more important development than "Hey, this Totti guy's alright!" arose from the match: Miralem Pjanic was beyond brilliant, and doing so in a position which offered more to the team on the whole than - wait for it - the child who's been bearing much of Roma's weight this season: Erik Lamela. The connection with Totti was undeniable, but his ability to spoonfeed Mattia Destro and any who were bombing in from the midfield was light years beyond what Erik provides at current; of course, Lamela's a bit more selfish, a bit more direct, and providing goals. None of these things are problems - the problem lies in that which it presents to Zeman.

There needs to be a way to get both on the pitch. And Totti. And keep the midfield not with the same personnel, but as robust as it can be with Tachtsidis sitting deep, because it's clear a little bit of defense goes a long way. And with a proper prima punta on the pitch. And all of a sudden, Zeman's running out of spots unless he shifts from the 4-3-3. Lovely problems to have, really, but yesterday was as important for the future as it was for the table: if they sell Pjanic, heads must roll.

True masterpieces are to be enjoyed for the delight in the experience, not mere reveling in remembrance. This was one of those matches.

Funny how that happens, no? Offered weeks to simmer in the losses, yet thrust into another match immediately after the victories.

If this was Italy, they'd call it a conspiracy or somethin'.